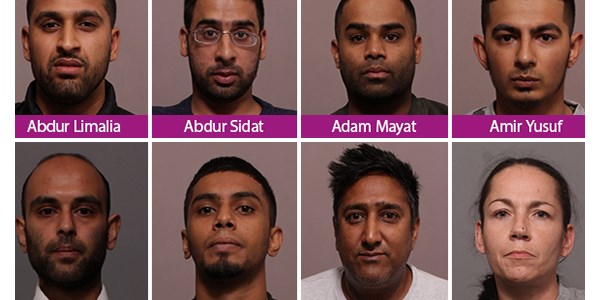 Gang jailed for total of 160 years for large-scale drug supply.

THIRTEEN members of a 25-strong Leicester-based organised crime group have been sentenced for their role in large-scale drug supply across the county.

The 12 men and one woman – who were convicted or pleaded guilty to offences at earlier hearings – appeared at Leicester Crown Court between February 17 and 19 where they were sentenced.

Officers from East Midlands Special Operations Unit (EMSOU) spent “an undeterminable number of hours” investigating the group, who used dedicated phone lines in order to supply and distribute heroin, cocaine, and crack cocaine across Leicestershire between July 2017 and September 2018.

In January 2018, officers became aware that the gang had a dedicated ‘dealer’ line manned by gang ringleaders, Adam Mayat and Mohamed Khan.

The phone line was used by ‘customers’ looking to buy drugs. An order would be placed with the dealer who in turn used a separate mobile phone to contact one of the runners in the group.

The runner would be sent to meet with the customer and exchange drugs for cash.

Detective Inspector Lee Hunt, from EMSOU, said: “This gang ran a highly organised outfit and for a while, they prospered. What they didn’t bank on was our determination to thoroughly investigate and destroy their operation bringing all those involved before the court.

“The outcome of this lengthy and complex investigation proves our commitment to tackling those whose intent is to flood our streets with illegal drugs.”

Two other men, Mohamed Makodia, 23, of Asfordby Street, Leicester, and Nitesh Vara, 43, of Lynmouth Drive, Leicester, pleaded guilty to conspiracy to supply class A drugs at earlier hearings. They will be sentenced at a later date.

A 30-year-old man from Leicester was found not guilty of conspiracy to supply class A drugs at an earlier hearing.