Barcelona Rocked By Fifth Night Of Protests Over Rapper’s Jailing 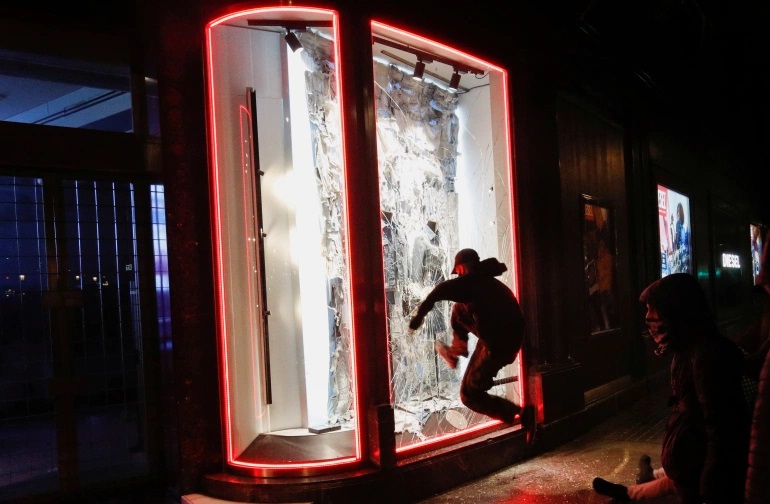 BARCELONA has been rocked by a fifth night of protests over the imprisonment of rapper Pablo Hasél led to the looting of numerous shops in the city centre. The violent clashes soon reached two emblematic buildings: the Palau de la Música and the Barcelona Stock Exchange.

Over the past four days, there were occasional attacks on businesses and banks, but the incidents were mainly clashes between protesters and the police. This Saturday, the stores of two commercial areas – Portal de l’Àngel and Passeig de Gràcia – suffered the wrath of young people who demand Hasél’s release amid a climate of growing social unrest for the consequences of the pandemic.

The Mossos arrested 35 people in Barcelona, ​​in addition to two others in Tarragona and one in Lleida, where there were also minor incidents. The day ended with 13 treated for injuries; two of them were hospitalised.

The disorder appears to have come from a fringe group of mainly younger people who constituted a small share of the thousands of participants who joined in marches to support Hasel and to oppose the Spanish laws used to prosecute him. Barcelona Mayor Ada Colau has again appealed for calm.

“Defending the freedom of expression doesn’t justify in any case the destruction of property, frightening our fellow citizens and hurting businesses already hurt by the crisis” caused by the pandemic, the mayor said.

The demonstration on Saturday started at 7:00 p.m. in the usual setting: the Plaza de Universitat. It was the most massive of the five carried out because it brought together, according to the police, 6,000 people. On Tuesday, the day of the first protest after Hasél’s admission to Ponent prison for a crime of glorifying terrorism, some 4,500 people gathered in the streets of the city. Since then, the number had declined steadily. Until this Saturday. Columns of protesters left their neighbourhoods in Barcelona and the metropolitan area to congregate in the city centre.

Madrid municipal authorities said that 300 National Police officers had to be called up to assist city police.