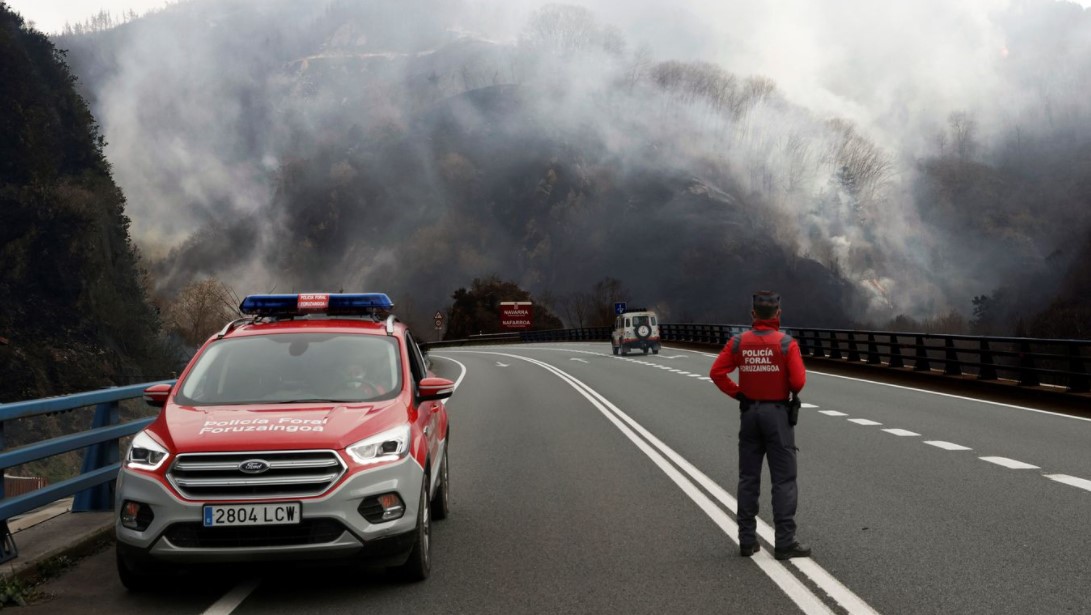 A forest fire that broke out on Saturday morning in the Navarrese town of Bera has spread uncontrollably and had already crossed over the border from Gipuzkoa into France by midday, and reached the French towns of Azkaine and Urruña, with the Military Emergency Unit (UME) already arriving in the area.

Firefighters found it increasingly more difficult to tackle the inferno, with high winds making it impossible to use helicopters to tackle it from above, so a Foca plane from the Torrejón base and a Kamov heavy helicopter has been requested from the Ministry.

Eventually, the emergency services had to evacuate around 40 villages and homes in homes in Lesaka, Endarlatza, and Bera.

María Chivite, the president of Navarra is in charge of the emergency team and President Pedro Sánchez has shown concern through social media networks about the rapid spread of the fire, with reports that in the afternoon, 68 mountaineers had to be evacuated.

Eider Mendoza, the Gipuzkoan deputy for Governance, who is at the mobile command post installed by the regional fire service, confirmed in a statement that “the fire has burned around 100 hectares of forest in Gipuzkoa. As a precaution, a score of hamlets in the Bidasoa neighborhood of Irun have been evicted, and at the moment we are closely monitoring their situation”.

Gipuzkoa Provincial Council has thirteen vehicles from its fire stations, and the trailer from the command post has moved to the site, with about twenty troops trying to smother the flames. In addition, the regional management of Montes y Medio Natural has mobilized four forest rangers and four checkpoints with a total of fourteen people, in addition to a technician and two fire fighting trucks.

Thank you for taking the time to read this news article “Forty Villages Evacuated After Mountain Fire Spreads In Navarra”.