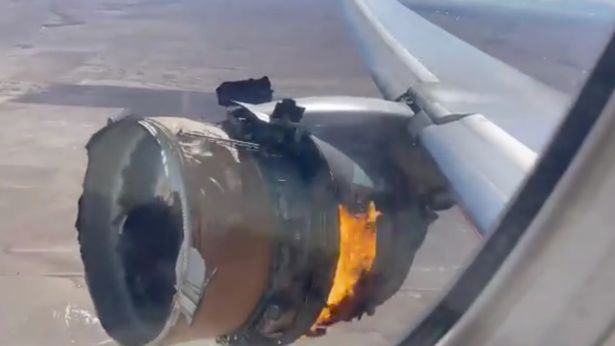 PLANE PASSENGERS were left terrified as a mid-air explosion saw parts of one of the planes massive jet engines fall out of the sky and land on a residential estate thousands of feet below. It is believed there were 200 passengers on board.

Large parts of United Airlines flight 328 fell onto Broomfield in Colorado following an engine explosion on the passenger jet. The plane landed safely at Denver International Airport with passengers applauding the pilot as it touched down on the tarmac. Terrified passengers reported being shaken violently in their seats when the plane engine exploded, which littered the neighbourhood below with debris.

Passengers were flung around in their seats by the mechanical failure, which caused the engine to blast into dozens of pieces. People on the street below watched on as large metal chunks rained down from the sky, smashing into roads and gardens. Witnesses reported hearing a loud bang in the sky above Denver, USA at around 1.30 pm local time (8.30 pm GMT), with some forced to run for cover to avoid the metal chunks.

One man who said he was on board tweeted: “I’m on #UA328, pilots did an amazing job because it was loud, shaking, and scary as hell back here. Fire crews have us out on the tarmac.”

One woman saw parts of the plane falling from the sky at around 1.30 pm local time. “We were at the dog park when we heard the loud boom from the aeroplane and pieces of the plane started falling,” she said.

The plane, a Boeing 777, which was headed to Hawaii, turned back and landed safely at Denver International Airport to cheers from passengers on board.

A former senior manager at Boeing’s 737 plant in Seattle has raised new concerns over the safety of the company’s 737 Max. The aircraft, which was grounded after two accidents in which 346 people died, has already been cleared to resume flights in North America and Brazil and gained approval in Europe this week.

But in a new report, Ed Pierson claims that further investigation of electrical issues and production quality problems at the 737 factory is badly needed. Regulators in the US and Europe insist their reviews have been thorough, and that the 737 Max aircraft is now safe.

In his report, Mr Pierson claims that regulators and investigators have largely ignored factors, which he believes, may have played a direct role in the accidents. He explicitly links them to conditions at the company’s factory in Renton, near Seattle at the time. Boeing says this is unfounded.