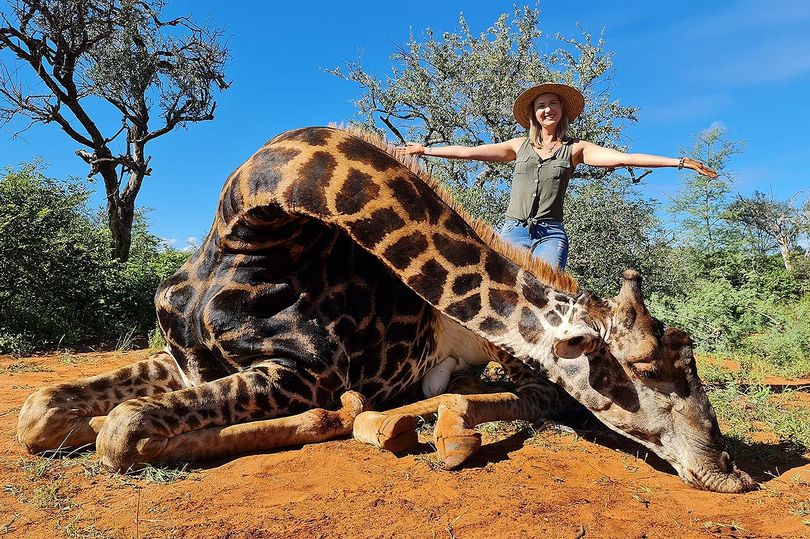 Trophy Hunter Poses For A Photo With Her 'Valentine's Gift' - The Heart Of Giraffe She Just Shot. image: Facebook

Trophy Hunter Sparks Outrage As She Poses For A Photo With Her ‘Valentine’s Gift’ – The Heart Of A Giraffe She Just Shot.

TROPHY HUNTER Merelize Van Der Merwe, 32, has boasted of how her “wonderful” husband spent £1,500 to make her five-year dream come true at a game park last Sunday. The sick photo she proudly posted on her Facebook page has caused outrage among animal rights campaigners.

However, the defiant mum astonishingly insists killing the ageing bull giraffe helps SAVE threatened species in South Africa – a claim dismissed by conservationists. Van Der Merwe, who started hunting at five and has killed up to 500 animals including lions, leopards and elephants, says she posted the snap just to taunt the animal rights lobby.

“I have no respect for them – I call them the mafia,” she said before excitedly telling all about her dream day. The couple had been planning a Valentine’s trip to the resort of Sun City when a pal called her to say a kill she coveted had been spotted in a game park.

“I’d waited years for my own perfect bull – the older a bull gets the darker he gets,” she said. “I love the skin and the fact it’s such an iconic animal for Africa. Our plans changed quickly. My wonderful husband Gerhardt knew this was my dream. I was like a child for two weeks, counting the days. Afterwards, I was flooded with emotions.”

She plans to use her 17-year-old victim’s skin as a rug – and posted her pic with the comment: “Ever wondered how big a giraffe’s heart is? I’m over the moon with my Valentines present!!!”

Van Der Merwe – who runs a citrus farm in South Africa’s northern Limpopo province– claimed her kill “created work for 11 people that day” and “a lot of meat for the locals”. She claimed the death of the old bull would mean “a new bull can take over and provide new strong genetics for the herd”.

She added: “If hunting is banned, animals will become worthless and will disappear. Hunting has helped bring back a lot of species from the brink of extinction. The only people protecting these animals are trophy hunters.”

Photos of an American hunter posing with the dead body of a “rare” black giraffe she had just killed during a hunt in South Africa sparked outrage in June 2018.

The pictures emerged after they were posted on Twitter by the South Africa-based AfricLand Post website. Accompanying the post, which shows two pictures of Tess Thompson Talley of Kentucky, were the words: “White American savage who is partly a neanderthal comes to Africa and shoot down a very rare black giraffe courtesy of South Africa stupidity. Her name is Tess Thompson Talley. Please share”.

A zoo dubbed “the UK’s worst” has closed after 57 animals died in one year.

Thank you for taking the time to read this news article “Trophy Hunter Poses For A Photo With Her ‘Valentine’s Gift’ – The Heart Of Giraffe She Just Shot”. For more UK daily news, Spanish daily news and Global news stories, visit the Euro Weekly News home page.