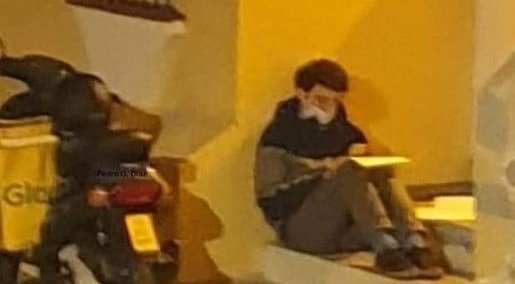 Student praised as he’s snapped studying on steps while wating to make home delivery.
THE young male was captured with his head in his books in Pedregalejo, Malaga, as he waits 20 minutes for a takeaway to be prepared for delivery
The photograph was posted to social media by the Policías España, página de apoyo a los nuestros (Police Spain, support page for our own) and has been shared 29,000 times, liked 7,000 times, and received almost 700 comments in just 24 hours.
And while there was praise for the young man, many argued the picture of him sitting on the floor studying highlights how the “system is failing”.
The original post reads: “At 9pm a young man awaits a call to deliver a home order and in the meantime, sitting on the ground, studies in the light of a streetlight.
“He pulled out his book and notes and was studying for almost 20 minutes until the order was ready.
“While some break shops, loot shops and cause damage in the streets….others look for a way and take time to make a promising future (for themselves)”.
“Needless to say my applause of the month goes to this young stranger.”
Immediately, hundreds of Facebook users heaped praise on the conscientious young man, but at the same time questioned why he should have to study in the streets and suggested the system had failed the student.
“Indeed, this boy has very well-defined future objectives,” wrote one user.
While another said: “Wait, wait, wait…we’re applauding this? A kid sitting on a cold step, studying with four sheets of paper, and a motorcycle next to him…put a 24h library in his town for the kid, give him a tablet, or whatever, so that he can access as much information as possible, stop thinking this has to be so bro.”
A third wrote: “It is unfortunate that a student is forced to accept semi-slavery in order to have a future. This system has failed if that an example of anything.”
The identity of the young man has not yet been revealed.