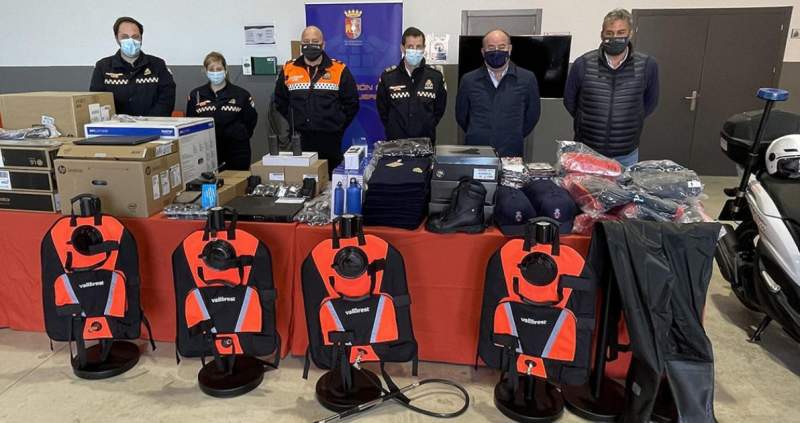 Manuel Barón, the mayor of Antequera, and Ángel González, the deputy mayor delegate for Traffic, Security, Civil Protection and Human Resources, on Monday 22 presented new material and equipment to the Local Civil Protection, “in an effort to continue modernizing said service and improve it”.

The two officials explained that Antequera City Council has invested 30,000 euros in “a new commitment to the important work carried out by volunteers and Civil Protection technicians, which only in what we have of a pandemic is accounted for in more than 500 actions carried out”.

Mr Barón reported that, of the 30,000 euros of investment, the Junta de Andalucía has been able to contribute 7,000 as a subsidy, with the remaining 23,000 coming out of the 2020 City Council budget, commenting, “I am amazed because I believe that the modernization of Civil Protection in Antequera is no longer a specific event, but rather a trend that has been highlighted in recent years”.

He continued, “This supposes the bet since we take Civil Protection seriously, since we take seriously the service they perform. We reward them in this way so that they have the best means available from all the Civil Protection groups, not only in Malaga but in all of Andalucía”, while acknowledging that it is “an indispensable job for Antequera society”.

Ángel González, the Deputy Mayor reiterated the fact that “since we came to the Government the mayor has always had, between eyebrows, the investment to make in Civil Protection, something demonstrated so much with the new headquarters that it has, as with the continuous improvements in equipment that are being carried out periodically, which allows us to be one of the most modern and best-equipped groups in all of Andalucía”.

He concluded, “This is a magnificent example of the good use of public money, of which Antequera should be proud of how money is managed, how it is invested and what it is intended for”.

Thank you for taking the time to read this news article “Antequera Civil Protection Receives €30,000 Worth Of New Equipment”.