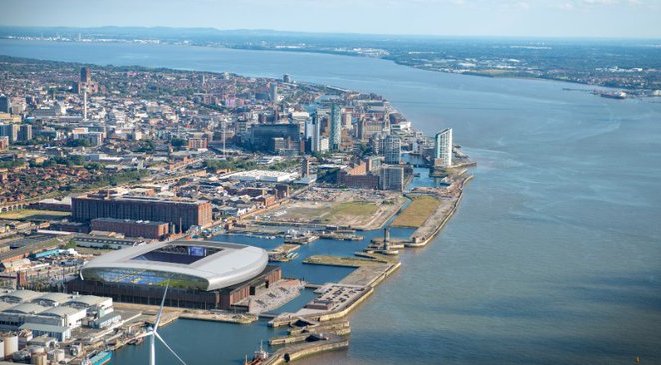 LIVERPOOL City Council has given the go-ahead to Everton’s proposed €580 million stadium in the city’s docklands.

The club’s planning applications for a new stadium at Bramley-Moore Dock and a community-led legacy project at Goodison Park were today unanimously approved following a two hour ‘special meeting’ of councillors.

The plans were met with strong opposition from Heritage England, UNESCO and the Victorian Society but after studying a 200-page report, the council planners said the stadium proposal is a “significant event in the history of the city” and “is a major decision for the local planning authority.”

The decision to grant approval for a new 52,888-capacity waterfront stadium and the outline application for a re-imagined Goodison Park brings both projects a significant step closer, said the Club in a statement.

Everton Chairman Bill Kenwright said: “Whilst today is just one more step in our long journey, it is a very important one.

Thanking those behind the project, he added:

“We are also enormously grateful to the many organisations and tens of thousands of individuals across the city region who have given us their feedback, ideas and support along the way. It’s been a good week for Everton and Evertonians.”

Liverpool City Council is looking into an outline plan to turn the existing stadium at Goodison Park in Walton into affordable housing with health centre and community-led retail spaces and business facilities.

While Everton hopes to start work at Bramley Moore Dock by the summer.

However, first of all the plans must be signed off by the Secretary of State for Housing Communities and Local Government – standard practice for a development of this size and scale.

The Government will have an initial 21 days to review the application before reaching a decision.