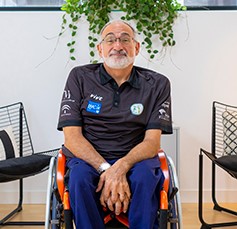 THE council has approved a motion to pay tribute to the renowned local athlete, co-founder of the Club AMIVEL and national and international wheelchair basketball player.
Mayor of Velez-Malaga, Antonio Moreno Ferrer, said “this will be a well-deserved recognition of his personal contributions and professional and sports career along with the effort and dedication he has always shown in promoting social inclusion”.
“In addition to being a figure much-loved and admired by everyone in the municipality, Paco is very involved in improving the quality of life of people with disabilities,” added Moreno Ferrer.
Francisco José Aguilar Campos, known as Paco, was born in Velez-Malaga in 1959, and is a professor of therapeutic pedagogy.
“His whole life he has participated and actively contributed to the sports world, beginning at the early age of 12 years.,” said the mayor.
He started as a coach of the CD AS football where he directed a child and youth team from the Velez municipality and was one of the first monitors of the sports area of Velez-Malaga Council.
He was a basketball monitor in the municipal sports schools in different categories from 1980 to 1987 and coach of the senior category of the Axarquia Basketball Club during the 1987 to 1994 seasons.
He also served as director of the Cantera from Clinicas Rincon de Baloncesto from 2010 to 2018.
In 1992, together with other people, he founded the association AMIVEL, of which he has been president for 15 years and continues to serve as vice president today.
In 2003 he was appointed coach of the Spanish National Team of BSR Category under-22 and assistant to the men’s and women’s senior teams.
A year later he won the bronze medal in the European Under-23, held in Belgium; and in 2005 he participated as second coach in the U-23 World Cup, held in Birmingham, where he came seventh place.
And the following year they were gold medalists and European champions in Istanbul, becoming European Champions in Adana, Turkey) in 2008.
In 2009, at the BSR U-22 World Championship in France, his team were runners-up; in 2006 they were gold medalists and European champions in Istanbul and in 2008 European Champions in Adana.
And in 2009, at the BSR U-22 World Championship in France, his team were runners-up.
The list of his sporting achievements go on.