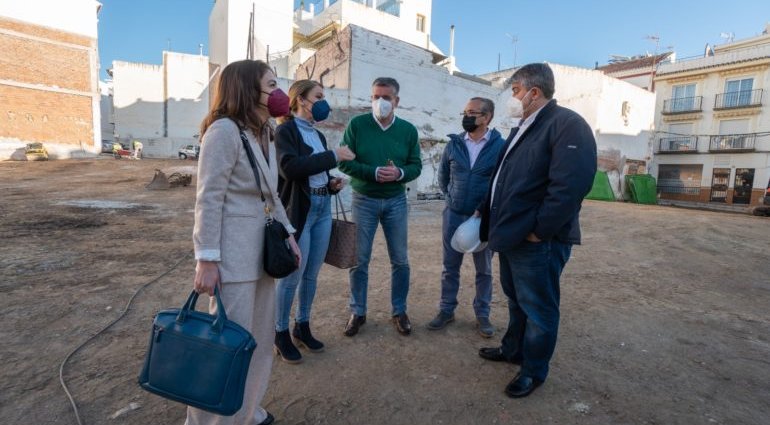 THE mayor of Nerja has announced the end date for the demolition of the town’s Cultural Centre.

Mayor Jose Alberto Armijo has met with residents to announce the end date to the demolition of Nerja’s Cultural Centre.
According to the mayor, the demolition works at the Giner de los Rios Cultural Centre will end on Friday March 5.
He announced the news after visiting the plot alongside Councillor for Urbanism, Nieves Atencia, and Councillor for Culture, Gema Laguna, where they held a meeting with neighbouring property owners to address the issues that have been raised.
Also present at the meeting were the site director, Manuel Navarro, and the site manager of the winning company, Hernan Montero, who reported on the progress of the work.
The company responsible for the works, Transportes Antelo S.L., is finishing conditioning the plot, after carrying out work to the rainwater network and building a wall adjacent to Calle Diputacion, which will have a pedestrian exit.
After the demolition works, the plot will be asphalted and the road that will temporarily join Calles Manuel Marin and Granada will be marked, as well as a new parking and loading and unloading area.
The news comes after it was announced Nerja would provide new premises for the Red Cross.
The council said the Red Cross in Nerja would be given new premises to “allow many needy families to benefit from their projects and programmes.”
The Red Cross have said they are pleased with the news, after it was decided that the organisation would be moved to the ground floor of Nerja Town Hall.
The news was announced by Nerja’s mayor, Jose Alberto Armijo, who has held a working meeting with the Provincial Secretary, Rafael Rodriguez, and the Red Cross coordinator, Samuel Linares, alongside Councillor for Social Services , Daniel Rivas, regional president, Eduardo Recio, and volunteer manager, Antonio Santana.