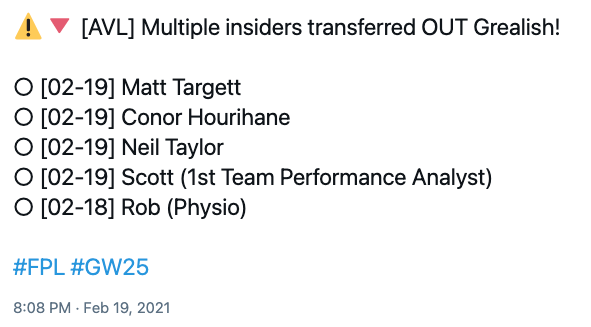 A NORWEGIAN Aston Villa fan has been revealed as the man behind Premier League injury leaks that have been beneficial to Fantasy Dream Teams but not so much for Premier League managers – even his own club’s boss.

On Sunday, February 21, Aston Villa faced high-flying Leicester City without their star man Jack Grealish. However, despite trying to keep the injury under wraps, his injury was inadvertently leaked to Leicester, and the world, via Fantasy Premier League dream team changes.

The Twitter account FPL Insider reported that multiple Villa players and staff had transferred Grealish out of their dream teams, leading to social media rumours and talk of the player being injured.

Leicester’s manager Brendan Rodgers admitted he had heard rumours about Grealish’s fitness before the game on social media and Aston Villa manager Dean Smith called for an investigation into the leaks from the club.

Henning runs the Twitter account FPL Insider, which currently has more than 37,000 followers, offering tips for Fantasy Premier League – an online game where competitors pick their own teams and are awarded points depending on how well the players they choose do in matches in real life.

Explaining how it all started, Henning reveals it was when he heard that Liverpool’s Andy Robertson had transferred teammate Sadio Mane out of his fantasy team at the start of the year.

“I wondered if it was possible to check if Premier League players or staff connected to clubs had made any transfers in the FPL game,” he tells Newsbeat.

As reported by the BBC, Henning says he created the bot – an automated computer programme – that would scan the FPL accounts of staff, players and junior players – who Henning calls insiders. When an insider removes one of their teammates from their fantasy line-up, the bot picks it up and tweets it.

“At the start it was very manual and tedious,” he says.

“I had to spend hours on Google, LinkedIn and Football Manager 21 to find staff and even junior players.”

From there Henning explains he found individual fantasy football leagues used by multiple footballers and staff.

“It’s a lot different between the clubs because some of the clubs have almost official team leagues,” he says.

“Wolves have a league where it’s basically all the first team players.”

Other teams he says were a bit more secretive.

“Everton had funny names that you really had to be clever to find out who they were.”

Once he had identified his insiders Henning says he “just had to list it and create some logic in the bot to pick up the transfer activity and connect it to Twitter”.