YouTuber accused of arranging sexual assault against a former colleague 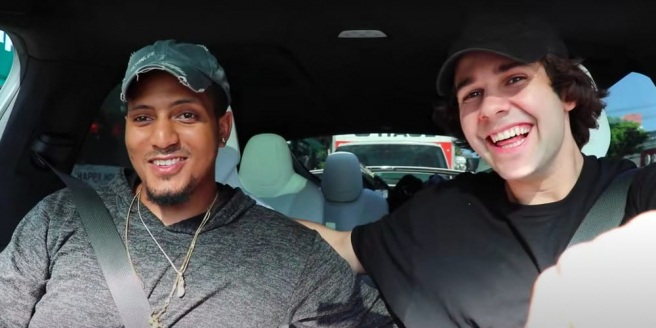 YOUTUBER David Dobrik has been accused of arranging a sexual assault against a former colleague for a video.

Back in 2017, Dobrik led fellow YouTuber Seth Francois to believe that a model was going to kiss him, but instead it was a 45-year-old man.

The two worked together in the group Vlog Squad with which the 24-year-old influencer, who has more than 18.8 million subscribers, recorded videos with his friends.

Francois, 26, starred in this publication which went viral in 2017 and accumulated, before being hidden, more than 10 million views.

The video was called “He thought he was kissing her!! (Super Cringey)” and Francois was made to believe that model Corinna Kopf would kiss him, but instead, the one who actually kissed him was Jason Nash, a 45-year-old comedian.

The victim spoke in an H3 podcast earlier this month about what happened. “I was touched by someone that I had not consented to” he complained saying that he felt traumatised by the experience.

In an interview with Business Insider he confessed that he was training his mind to overcome it: “It was not my fault. I did not ask for that to happen to me. And it did. But it is something I personally have to live with.”

He left Vlog Squad in 2019 and explained that he had kept quiet because he did not want to draw attention to this issue, because he felt that his masculinity had been taken away from him and that he needed to rebuild and redefine himself again.

He also confessed that it was not until he left that he began to see the ‘joke’ as something “creepy and strange.” He said that when he started to think of it as something criminal rather than a joke, he understood that “David and Jason Nash were hiding from me because they can’t let the world know that probably the big secret inside the Vlog Squad is my sexual abuse.

“People say that I have betrayed David, but I feel that he has betrayed me. I felt very hurt and even right now talking about it, it really makes me want to cry,” said Seth Francois.

The video, although hidden, is still available on YouTube and although Francois says that he has repeatedly asked his former friend to remove it, he has ignored him.

In the days following its first publication, many of Dobrik’s followers voiced their support for Francois. Jack Link’s Jerky, a beef jerky brand that was seen in the video, issued a statement to clarify that it had not sponsored the vlog, saying it did not “tolerate or condone any non-consensual conduct such as what happened in this video”.

Following the allegations, a whole movement has been launched to demand that Dobrik should be taken off the Internet.