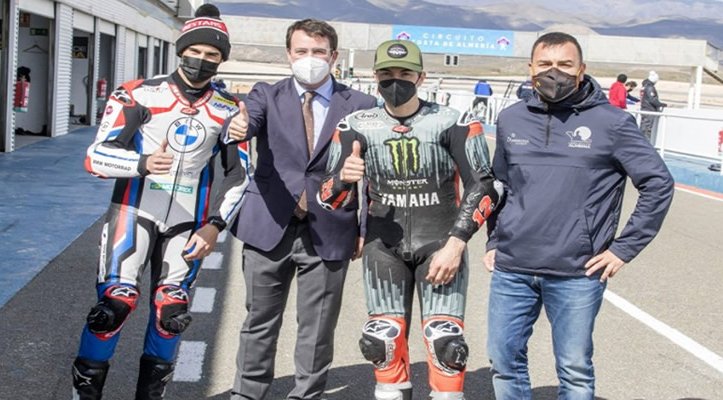 The Almería Circuit facilities located in the municipality of Tabernas, in the province of Almería, houses the largest racetrack in all of Europe and has now been given the new title of ‘Costa de Almería’, after a visit by Fernando Giménez, the Deputy Minister for Tourism.
The minister attended the circuit, where he met with manager David García, highlighting to him that it is “a strategic alliance” with a private project that places Almería as the epicenter of motorsports in southern Europe, “It is one more opportunity to sell this enormous reality”.
He continued, “Almería is always united with sport and this agreement with the circuit will allow us to continue attracting teams, teams and drivers, while at the same time bringing to a gala a great destination, diverse, rich and unique, also linked to the engine”, said Mr Giménez.
The complex consists of two circuits: the ‘Costa de Almería’ which 4.2 kilometers in length, and the ‘Andalusia Circuit’ which 5 kilometers long, but, it is possible to connect both tracks results into the ‘Iberia Circuit’, which then becomes the largest race circuit in all of Europe.
David García pointed out, “It represents a very important boost for the Circuit, which is now called the ‘Circuit Costa de Almería’. Thanks to the alliance we will be able to reach more customers from all over Europe and we hope that our two circuits can continue to be a benchmark for national and international level”.
The brand name ‘Costa de Almería’ will be placed in a prominent position right on the circuit’s start and finish bridge, on the two emblematic curves, at the main entrance to the circuit, and in the pit area, and there is already a marketing strategy in place in all relevant media and communication channels, in the commitment of attracting at least 25 major race events annually.
Many great riders have forged their careers training on this circuit, notably, Tito Rabat and Maverick Viñales, as well as motorcycling ’emblem’ teams and teams at a world level, and in addition, cycling teams have used it for training, whilst prestigious motorcycle and motoring brands choose the track to test and advertise their vehicles.
_______________________________________________________
Thank you for taking the time to read this news article “Almeria’s Tabernas Race Circuit Rebranded As ‘Costa De Almeria’”.
For more UK daily news, Spanish daily news and, Global news stories, visit the Euro Weekly News home page.