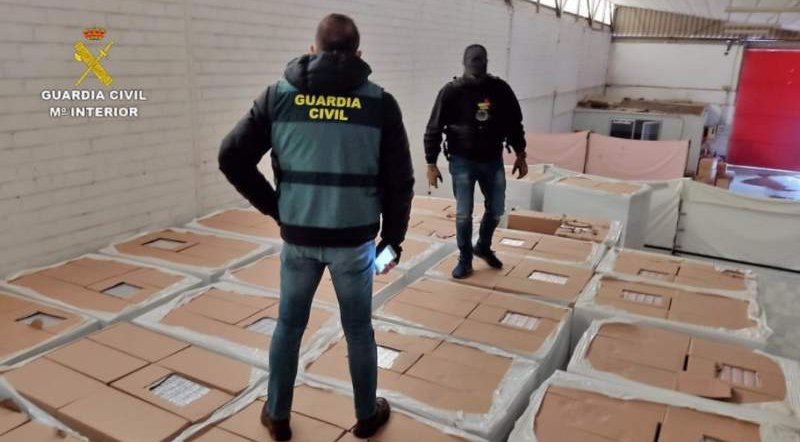 Córdoba Tobacco Counterfeiting Network Is Broken Up By The Guardia Civil

The Guardia Civil has reported recently conducted ‘Operation Sanforo’, in which they snared and broke up a criminal gang in Córdoba responsible for the forgery and distribution of tobacco, seizing 494,500 packs of counterfeit tobacco in a warehouse of an industrial estate in Córdoba capital, as reported by elmira.es.

In a press release, the Guardia Civil said the alleged perpetrator of the crime of smuggling, and another against industrial property for forgery of  tobacco, was a resident of the Cordovan town of Santaella.

They had put the suspect under surveillance since the start of the year after the Organised Crime and Anti-Drug Team (EDOA) of the Guardia Civil had detected that a group of people could be involved.

After an “arduous and complex” investigation process, the officers managed to establish that the group was using a warehouse located in an industrial estate in Córdoba for the storage of large quantities of tobacco and then proceeding to distribute it to smaller-scale logistics centres.

The EDOA identified a lorry that was carrying out unloading activities in one of the warehouses, using lookouts and highly suspicious actions, when after the unloading was completed one man seemed to continue as a lookout, which made the officers suspect that some type of illegal merchandise might be being stored inside the warehouse.

A raid of the premises seized 33 pallets containing a total of 494,500 packs of counterfeit tobacco from two well-known brands, which were seized, with a market value of €2,178,900, and the man inside the warehouse at the time of the raid was arrested, with the police saying further arrests have not been ruled out.

Thank you for taking the time to read this news article “Córdoba Tobacco Counterfeiting Network Broken Up By Guardia Civil”.