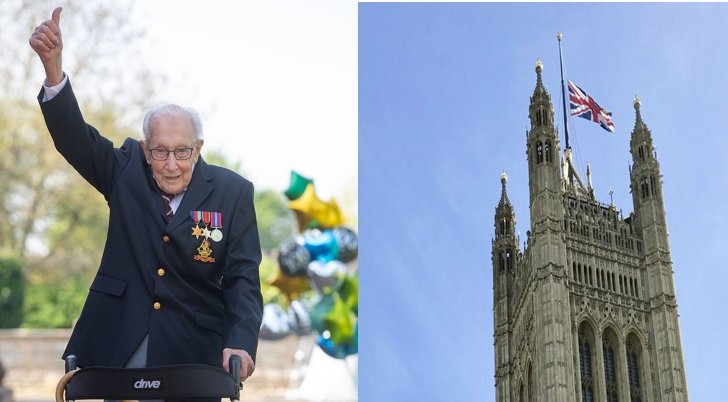 Flags Are Being Flown At Half Mast Today As Britain Prepares for Captain Sir Tom Moore’s Funeral.

Flags are being flown at half mast across Britain ahead of Sir Captain Tom Moore’s funeral as the nation prepares to say goodbye to their NHS fundraising hero. The funeral will take place close to his family’s home in Bedfordshire at midday today, Saturday.

The Keighley born former British Army officer, who raised almost £33 (€38)million for NHS Charities Together in the run-up to his 100th birthday last year, sadly passed away on the 2 of February this year.

Only eight relatives will attend the event, but Yorkshire Regiment soldiers will perform ceremonial duties. There will also be a flypast from a World War Two-era plane. The C-47 Dakota, part of the Battle of Britain Memorial Flight, which operates from RAF Coningsby in Lincolnshire, will perform the flypast. His family urged the public to stay at home to “continue to support the NHS”.

Six soldiers will carry his coffin into the crematorium and, a firing party of 14 will each fire three rounds in unison.

Singer Michael Bublé has recorded a special version of the song Smile to be played at the funeral. The charity single Sir Tom recorded with Michael Ball, You’ll Never Walk Alone, will also be played, along with The White Cliffs Of Dover by Dame Vera Lynn, I Vow To Thee My Country by Alife Boe.

My Way by Frank Sinatra will be heard at the end, as requested by Capt Sir Tom, who said he liked the line about “having too few regrets to mention”.

Sir Tom was actually in the audience when Dame Vera Lynn performed the song to a large group of troops in the second world war. After her death in June last year he said:” “A real shame, I really thought Vera Lynn would live longer. She’s been speaking so well on TV recently. She had a huge impact on me in Burma and remained important to me throughout my life. My thoughts are with Dame Vera Lynn’s family at this sad time.”

The defence secretary, Ben Wallace, said: “In national emergencies, ordinary people do extraordinary things and inspire us all to pull together to overcome adversity.
“Few will have heard of Sir Tom before this crisis but his contribution and example now live on in us all. The armed forces are immensely proud to contribute to the celebration of his extraordinary life of service.”