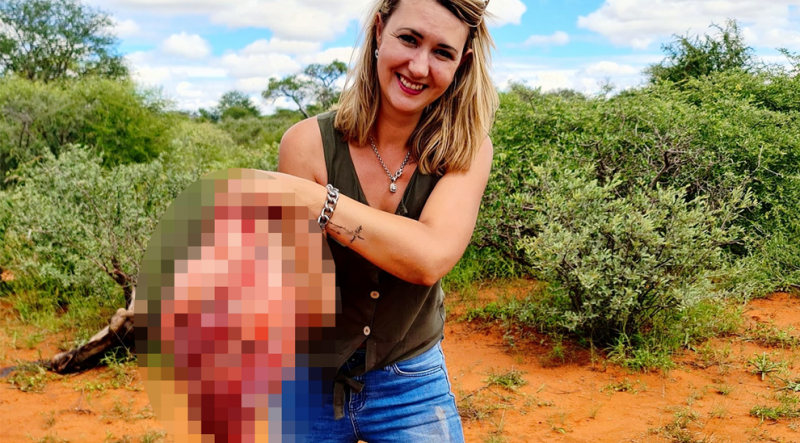 A TROPHY HUNTER has come under fierce criticism after posing with the heart of a giraffe she had just shot dead. Merelize Van Der Merwe, 32, and her husband spent £1,500 (€1,730) to make her dream come true on a trip to a South African game park.

She posted a number of photos on Facebook of the hunt including one in which she is proudly holding up its heart and captioned the image: “Every wondered how big a giraffe’s heart is? I’m absolutely over the moon with my big Valentine’s present.”

Van Der Merwe’s photos have sparked fury among animal rights activists, she argued the killing of the 17-year-old giraffe aided conservation efforts. She added the kill “created work for 11 people that day”, and “a lot of meat for the locals”.

She also wrote, “If hunting is banned, animals will become worthless and will disappear. Hunting has helped bring back a lot of species from the brink of extinction. The only people protecting these animals are trophy hunters.”

Animal rights groups refute her claim that hunting helped save threatened species with Born Free Foundation telling The Mirror: “Trophy hunters’ claims they are concerned about wildlife conservation are highly misleading. Trophy hunting is not a conservation tool, nor does it contribute significant funds to local communities.”

Van Der Merwe said she shared the pictures of her hunt online to taunt activists whom she referred to as “mafia” she had no respect for.

She plans on using the animal’s skin as a rug, saying: “I’d waited years for my own perfect bull – the older a bull gets the darker he gets. “I love the skin and the fact it’s such an iconic animal for Africa.”

However, it has been reported by The Sun that an online petition has since been launched which is aiming to have Van Der Merwe permanently banned from Facebook for sharing such disturbing images. The petition has already been signed by more than 30,000 people and says, “Why does Facebook, a supposed site with family values, allow this? Instead, they should do the decent thing: Ban her.”