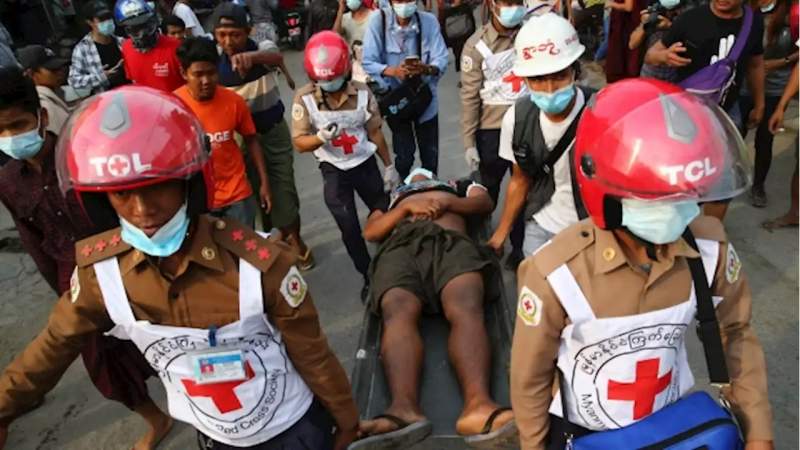 Three Reported Dead And Many Hurt As Myanmar Police Fire At Protesters.

This latest escalation in violence marked an increase in the level of force used against demonstrators who were previously met with water cannons, tear gas, and rubber bullets only. The ‘Myanmar Now’ media group posted a video of a wounded man lying on the street near the Hledan Centre intersection in Yangon, and said he had been “shot in his chest area by what appeared to be live ammunition”.

The violence in Yangon erupted early this morning when medical students were marching in the streets near the Hledan Centre intersection.

Footage showed protesters running from police who charged at them, and residents setting up makeshift roadblocks to slow their advance. Nearby, residents were pleading with police to release those they picked up from the street and shoved into police trucks to be taken away.

Video: Soldiers gunned down a few protesters in Yangon crackdown on Sunday pic.twitter.com/uwifk4ty1p

Local media outlet Dawei Watch confirmed that three had died in the incident. There have been unconfirmed reports of other deaths elsewhere in the country, including commercial hub Yangon. Officers in Yangon began dispersing one downtown crowd minutes before the scheduled beginning of the day’s protest, but it was unclear whether they used live rounds.

Sunday’s police action came after state television announced that Myanmar’s envoy to the United Nations, Kyaw Moe Tun, had been fired for betraying the country after he urged the global body to use “any means necessary” to reverse the February 1 coup that deposed elected leader Aung San Suu Kyi.

The military’s power grab and its detention of the country’s civilian leadership have plunged Myanmar into fresh chaos, just a decade after the end of nearly 50 years of strict military rule. For three weeks now, huge crowds have taken to the streets of cities and towns across Myanmar, calling for Aung San Suu Kyi’s release and the restoration of civilian rule.

As the popular uprising gathered steam, security forces have become more aggressive in using force. Three other protesters were killed earlier in February, while the military said a policeman has also been killed.

THE UK government has announced a raft of new sanctions on the Myanmar generals behind the February 1 coup, saying British companies should not be doing any business with military-linked firms, as tensions rose again in Myanmar over mass opposition to the military takeover.

Biden’s executive order was quickly followed by the first sanctions, a Treasury Department move to freeze the assets of a list of coup leaders and related figures. Here are five things to know about that U.S. response and its likely effect.

The Presidents Feb. 11 order authorises immediate sanctions on military leaders who directed the coup, their business interests and close family members, as well as officials connected with the junta.

In addition, Biden said, the U.S. government would impose “strong export controls” and freeze U.S. assets that benefit the military regime while maintaining support for health care, civil society groups and other areas that directly benefit ordinary people. Steps are also being taken to block access by the military regime to $1billion (€828,356M) of government funds held in the U.S.

In line with the president’s order, the Treasury Department has “designated 10 current and former military officials responsible for the February 1, 2021 coup or associated with the Burmese military regime,” subjecting them to asset freezes.

Rather than broad sanctions, the new measures are targeted, focusing on the Specially Designated Nationals, a blacklist of foreign nationals and entities prohibited from entering or dealing with the U.S.