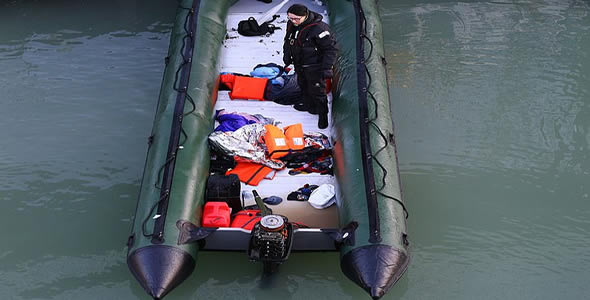 With Spring temperatures of 59F (15C), and calm weather conditions in the English Channel over the weekend, it was inevitable that the people smugglers would try to take advantage of that situation, but the UK Border Force was prepared, and detained four boats at the Port of Dover on Saturday, packed with 87 migrants, as reported by the Mailonline.

Images seen by the publication allegedly showed at least three children among the detained migrants, and a Home Office spokesman said that all the adults were tested for Covid-19, and one tested positive, while the nationalities and ages of the detained were not confirmed.

Apparently, the French authorities also detained 51 people in attempted crossings on Saturday, again making the most of the calm waters, which are forecast to become rough again from Sunday.

The French Maritime Prefecture of the Channel and the North Sea has warned of strong tidal coefficients from Sunday to Tuesday all along the French coast, so the Border Force is preparing itself for a possible last-minute attempt at crossings before the sea becomes too choppy.

The Home Office spokesman said, “People should claim asylum in the first safe country they reach and not risk their lives making these dangerous crossings. We are continuing to pursue the criminals behind these illegal crossings”.

They continued, “Police patrols on French beaches and enhanced intelligence sharing between our security and law enforcement agencies has helped to prevent crossings. The Government is also returning illegal migrants who have no right to stay in the UK to safe countries”.

Adding, “In January, new rules were introduced which make asylum claims inadmissible where people have travelled through safe countries to get to the UK through illegal routes”.

Thank you for taking the time to read this news article “UK Border Force Detains 87 Migrants On Four Boats At Dover”.