Does Harry Hint He Quit UK Fearing Meghan Would Suffer Same Fate As His Mother? 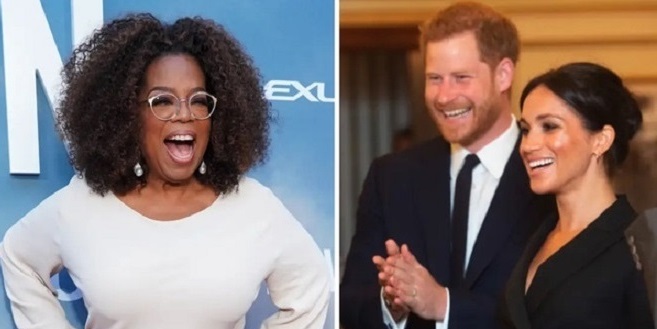 DOES Harry Hint He Quit The UK Fearing That Meghan Would Suffer The Same Fate As His Mother?

In an incredible sneak preview of Harry and Meghan’s forthcoming interview with Oprah Winfrey, released by CBS in the early hours of the morning, the burning question that most online media outlets are asking is – and you can watch the trailer below if you want to click, and make up your own mind – when Harry is heard saying to Oprah, “My biggest concern was history repeating itself”, was he referring to his mother Diana?

In the 30-second trailer, the Prince is seen sitting with Meghan, holding hands, and he says to her, “You know for me, I’m just really relieved and happy to be sitting here, talking to you, with my wife by my side. Because I can’t begin to imagine what it must have been like for her, going through this process by herself. All those years ago”.

He continues, “Because it’s been unbelievably tough for the two of us, but at least we had each other”, to which Meghan is heard to reply, “Yeah”.

Then Oprah turns to Meghan and asks, “Were you silent, or were you silenced? I just want to make it clear to everybody there is no subject that is off-limits. Almost unsurvivable sounds like there was a breaking point”.

Harry replied, “My biggest concern was history repeating itself”, to which Oprah responds, “You’ve said some pretty shocking things here. Wait, hold up, wait a minute”.

Courtiers and other royal hangers-on are said to have lived in fear of an Oprah interview ever since she was seated in pride of place at Meghan and Harry’s 2018 wedding, and now many believe their worst nightmares are coming true, as sources in Meghan’s camp appear to have briefed E! News that the couple will open up about the ‘tension’ within the royal family in the ‘very candid’ interview and that they will be ‘speaking their truth’.

Normal protocol is that all members of the Royal family run potential TV interview opportunities past the Queen in advance, but it has been reported that the Queen was blindsided by Harry and Meghan’s announcement of a “tell-all” interview with Oprah.

It is alleged that the Queen only found out about the interview, after, according to the Mail on Sunday, a producer working for Oprah had somehow alerted ITV by accident, and so CBS reportedly had to quickly make an official announcement on the Monday about the interview being made.

Thank you for taking the time to read this news article “Does Harry Hint He Quit UK Fearing Meghan Would Suffer Same Fate As His Mother?”.