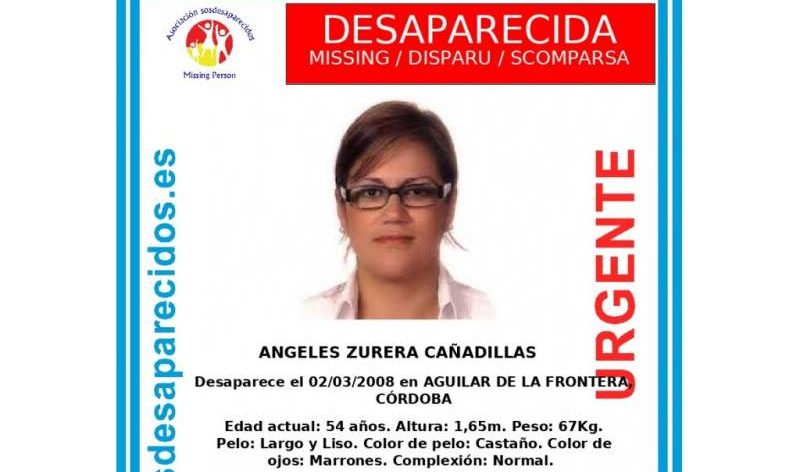 Angeles was 42 when she went missing

IT has been 13 years since Angeles Zurera went missing from Aguilar de la Frontera, Cordoba, on March 2, 2008.

Angeles was 42 when she disappeared from her home.

She left behind not only all of her ID, her clothes, her phone and the glasses which she could hardly see without, but also two children aged 18 and 19.

It was around 3pm on a Sunday afternoon when a car horn sounded outside the house and Angeles left, telling one of her sons she would only be a few minutes.

Her family held a march this weekend to remember her and to ask the justice system to reopen the case, as it has been provisionally closed.

Despite this, the search continues, and only last week, new areas were searched.

From the outset, the police treated the case as a homicide, rather than a missing person, and the family has said that all they want is to give her a proper burial.

Her ex-husband was a suspect, especially as just 12 days before she disappeared in February 2008, she had reported him for abuse. He was later sentenced for this.

The last call to the missing woman’s phone was from him. He was questioned several times and the illegal rubbish dump which he used to deposit building rubble was searched, however, no proof was found against him and he continues to live just 200 metres from the home of Angeles’s elderly parents. One of her sons lives with them, the other has returned to the home where they lived with their parents before they divorced, but neither has anything to do with their father.

While the couple was married, Angeles did not report abuse, and the marriage is supposed to have ended on friendly terms, but Guardia Civil suspect that he is involved in her disappearance.

In July last year, there was a search on a piece of land on the outskirts of the town, but nothing of interest was found.