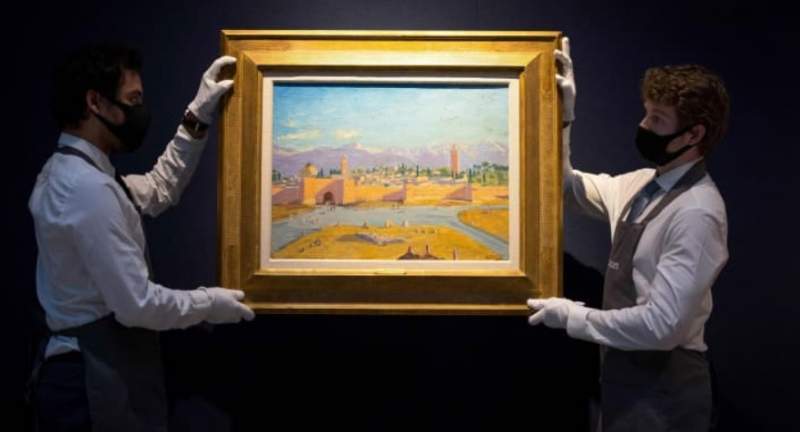 ANGELINA JOLIE’S Painting By Sir Winston Churchill Sells For A Record £8.2million at Christie’s of London

A painting called ‘Tower Of The Koutoubia Mosque’, by Sir Winston Churchill, which was up for auction yesterday (Monday 1) at London auction house Christie’s, in London, was expected to make up to £2.5million, as it was thought to be the only painting he had ever completed during the course of World War Two.

Being sold by actress Angelina Jolie, the painting was, according to a source, gifted to the actress by actor Brad Pitt in 2011, and yesterday sold for a stunning £8,285,000, a record for a work of art by Churchill.

The head of modern British art at Christie’s, Nick Orchard, revealed, “Churchill first visited Morocco in 1935, where he fell in love with the quality of light there. He felt that his paintings of the country were among his best·.

The PM painted ‘Tower Of The Koutoubia Mosque’ in 1943, and the landscape was gifted to US President Franklin D Roosevelt, as a memento of the men’s visit there following the Casablanca Conference of 1943.

Brad Pitt apparently bought the painting from Bill Rau, an antiques dealer, who had previously told CNN, “The painting depicts the very moment the two world leaders shared as they viewed the majestic landscape of Marrakech as the sun set over the Atlas Mountains, and to know Churchill gifted the painting to FDR after their time together excited me even more”.

Two more of Churchill’s works of art were up for auction yesterday, another light-filled composition of Churchill’s favorite place, “Scene at Marrakech,” sold for close to £1.9m, and “St Paul’s Churchyard,” sold at nearly £1.1m, both going for more than triple their expected price.
“The appetite for Winston Churchill’s artwork was demonstrated to great effect at Christie’s,” Orchard said.

Thank you for taking the time to read this news article “Angelina Jolie’s Painting By Winston Churchill Sells For Record £8.2million”.