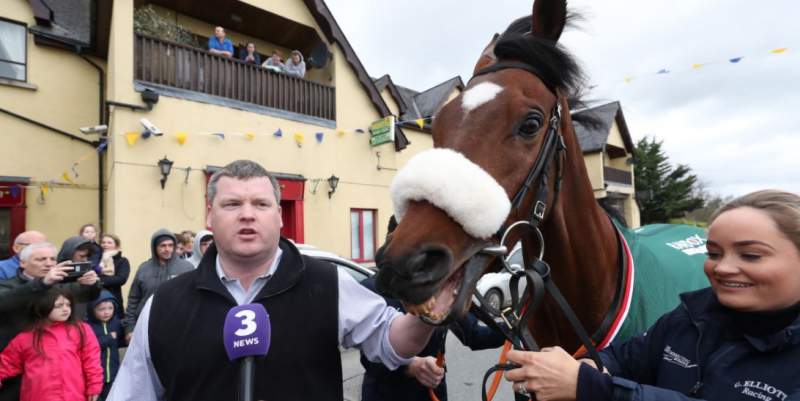 Gordon Elliott, the Irish three-time Grand National-winning trainer has been told by the British Horseracing Authority (BHA) that he is not permitted to have any runners in Britain while an investigation into him by the Irish Horseracing Regulatory Board (IHRB) is ongoing.

This action comes as a result of an image appearing on social media showing Elliott sitting on a dead horse on his gallops, with a statement by the BHA on Monday evening saying, “The British Horseracing Authority will not allow the Irish trainer Gordon Elliott to race horses in Britain whilst the Irish authorities investigate an image that appeared on social media over the weekend”.

It added, “The trainer admitted the photo was genuine and apologised for his actions”.

Speaking to The Racing Post, Mr Elliott said, “Whether alive or dead, the horse was entitled to dignity. A moment of madness that I am going to have to spend the rest of my life paying for and that my staff are suffering for”.

He continued, “I will be punished, I fully understand that. But it absolutely breaks my heart to read and hear people say that I have no respect for my horses. That couldn’t be further from the truth. My whole life has revolved around horses since I was a child. I know nothing else. Horses are all I have. I came from nothing and built a dream”.

Adding, “When your world starts crumbling in front of you, it’s a scary place to be. I just hope people can understand how truly sorry I am and find some way to forgive me for what I have done. I can guarantee that this will never happen again to any animal, alive or dead”.

The BHA in another statement said, “The BHA, which regulates racing in Britain, will use powers under its own rules to refuse to allow horses trained by Mr Elliott to race in Britain pending consideration of the outcome of the Irish investigation”.

It continued, “The action taken by the BHA recognises that Mr Elliott is licensed in Ireland, whose regulatory body, the IHRB, is carrying out its own investigation. However, Mr Elliott has entered horses to race in Britain, from which point the British rules of racing apply to him”.

Concluding, “The decision to refuse to allow horses trained by Mr Elliott to run in Britain is, therefore, an interim decision which the BHA regards as proportionate in these circumstances”.

Thank you for taking the time to read this news article “Gordon Elliott Stopped From Racing In Britain By British Horseracing Authority”.