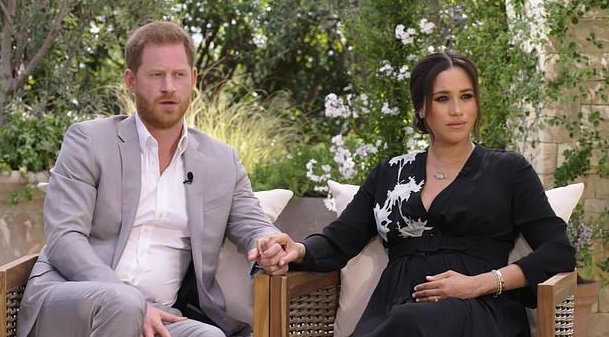 MEGHAN MARKLE and Prince Harry’s tell-all interview with US chat show icon Oprah Winfrey is due to air this weekend and has royal fans chomping at the bit. But while news of the sitdown rocked the Palace earlier this month, as it was agreed to by the Sussexes without them informing the Queen, it was reportedly in the planning for two years, insiders have claimed.

It is understood that Meghan originally tried to arrange a televised talk with friend and CBS anchor Gayle King after her son Archie’s birth in May 2019,  sources told the DailyMail.com

However, the interview was overruled by the Palace at the time over fears “it would alienate the UK press”, one insider claimed. According to a source, Ms King and Oprah have been in talks over a sit-down with the Sussexes ever since, eventually leading to the 90-minute interview due to air on CBS on March 7.

After Ms King’s initial interview plan was reportedly rejected by the Palace, the US journalist was invited to the first photoshoot of Harry and Meghan with newborn baby Archie at St. George’s Hall in Windsor.

The insider claimed that after her interview was denied by royal staff, “Meghan put her foot down” so that Ms King, a close friend of Oprah’s, would be invited to the photoshoot.

The announcement of the bombshell interview came just days after Meghan’s High Court privacy battle and mere hours after the couple confirmed they are expecting their second child. One royal source told the Mirror: “One only has to look at the previous instalments of the tell-all interview to know these things never end up with a wholly positive experience for any party. Everyone will be watching with intense interest.”

Meghan and Prince Harry moved to California with their son Archie last year after quitting the Royal Family- it could mean Meghan and Harry now have “no way back to official royal duties”, royal sources claim.