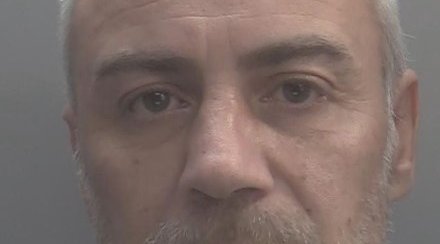 WAYNE LEWIS, 48, from Leicester, sexually assaulted a woman and then bombarded her with hundreds of messages.

He appeared at Leicester Crown Court on Monday, March 1, for sentencing after previously pleading guilty to sexual assault and a charge of continuously engaging in behaviour which was controlling or coercive.

Lewis, who has previous convictions including for attempted rape and sexual assault and is on the sex offender register and the subject of a Sexual Harm Prevention Order (SHPO), also admitted a breach of the SHPO.

The victim had reported the sexual assault to police and Lewis was arrested and questioned before being bailed in connection with the offence while the investigation continued.

Safeguarding support and advice was also provided to the victim, said Leicestershire Police.

While on bail, it was found Lewis had been attending the victim’s address and used a tablet device to record through a window of her property.

Over a period of six days, the defendant was also found to have sent the victim more than 100 messages and across two of those days, he had also made more than 30 phone calls.

During a separate two-week period around a month later, he had made more than 200 calls. Continuous messages were also sent to the victim on social media.

Enquiries were carried out by officers including phone analysis and Lewis was charged in connection with the offences.

While he initially denied the allegations in interview, the evidence gathered led to him pleading guilty at court.

Investigator, Emma Bailey said: “Lewis committed sexual assault but then continued to send hundreds of messages to the victim and even made recordings at her home. This undoubtedly caused a lot of fear and distress to the victim.

“The actions of Lewis are completely unacceptable and should not be tolerated in any way. Police will investigate any report of this kind, taking action while also providing support to those affected.

“My thanks go to the victim for her bravery and co-operation during this investigation which helped us to bring this case to court and I hope this does now allow her to continue moving forward in her life.

“We urge anyone who is a victim of a sexual offence or of any kind of controlling or coercive behaviour to make contact with us. We will take your report seriously and full support will be provided to you.”

Lewis was ordered to serve a total of five years and two months imprisonment. Following that, he will then serve four years and 10 months on extended licence.

He was also issued with a 10-year restraining order in relation to the victim and was made subject of a 10-year Sexual Harm Prevention Order.