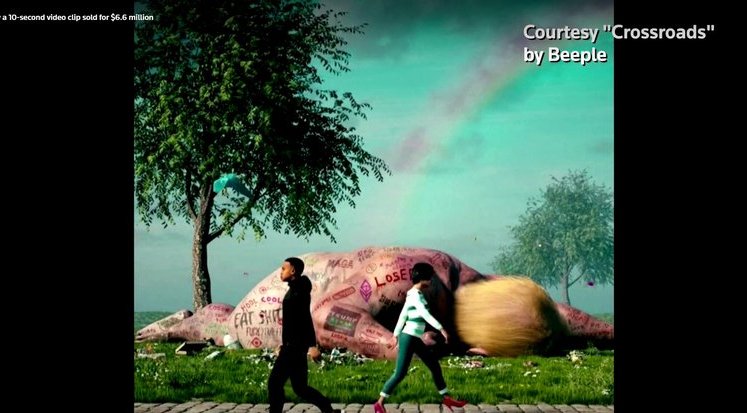 The video was the creation of digital artist Beeple, whose real name is Mike Winkelmann and was authenticated by blockchain. The authentication serves as a digital signature to certify who owns it and that it is the original work- it is a new type of digital asset known as a *non-fungible token.

“You can go in the Louvre and take a picture of the Mona Lisa and you can have it there, but it doesn’t have any value because it doesn’t have the provenance or the history of the work,” said Rodriguez-Fraile, who said he first bought Beeple’s piece because of his knowledge of the U.S.-based artist’s work.

“The reality here is that this is very, very valuable because of who is behind it.”

“Non-fungible” refers to items that cannot be exchanged on a like-for-like basis, as each one is unique – in contrast to “fungible” assets like dollars, stocks or bars of gold.

In the computer-generated video sold by Rodriguez-Fraile, it shows what appears to be a giant Donald Trump collapsed on the ground, his body covered in slogans, in an otherwise idyllic setting. OpenSea, a marketplace for NFTs, said it has seen monthly sales volume grow to $86.3 (€71.75) million so far in February, as of Friday, from $8 (€6.65)million in January, citing blockchain data. Monthly sales were at $1.5 (€1.25 )million a year ago.

Investors caution, however, that while big money is flowing into NFTs, the market could represent a price bubble- as is sometimes the case with any cryptocurrency.

Thanks to the Ethereum blockchain, artists, gaming companies and content creators alike are utilizing token standards, which ascribe provenance to uniquely distinguishable assets. NFTs first made headlines in 2017 when Dapper Labs’ game CryptoKitties accounted for 95% of Ethereum network usage at its peak.

While someone paying $170,000 (€141,374.55) for a digital cat seemed like an anomaly, what’s happening today blows that headline out of the water. The estimated total value of crypto art has now passed $100 (€83.16)million according to cryptoart.io/data — just one vertical of a growing ecosystem of NFTs.