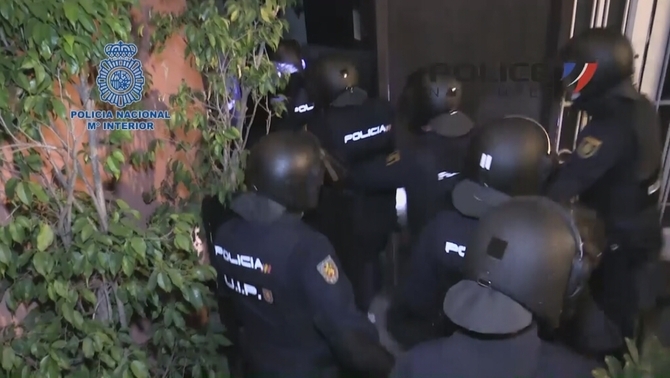 The call centre was located in Barcelona

A JOINT operation between French and Spanish police against sexual exploitation has resulted in a transnational organization dedicated to human trafficking being dismantled.

National Police located in Hospitalet de Llobregat, Barcelona, the call centre that the organization used to arrange appointments between French clients and the victims of sexual exploitation.

During the operation, which took place simultaneously in four European countries, 12 people were arrested, eight in Spain, two in France, one in Italy and one in Romania.

The French authorities have so far identified 33 female victims, all of them of Latin American origin, who were sexually exploited in France, where they are now receiving assistant.

The investigation began after two victims reported the situation and a court in Montpellier issued a European Investigation Order that allowed inquiries in Spain to begin.

In June last year the two Colombian women went to Montpellier Police Station claiming that they had fled an apartment where they had been kidnapped for week. More potential victims were located all of whom had been approached by a woman offering them paid employment in cleaning or childcare, but once they arrived in France they were forced into prostitution by the head of the organisation and several relatives.

The women had to hand over 50 per cent of their earnings to the criminal organisation that arranged appointments for them.

French clients called numbers that were advertised on a website and answered at the call centre, managed through French telephone operators. They were then messaged with an address that they had to go to, and once there, they made another call and were provided with the exact floor and room number where they would meet the women.

In Spain, more than €18,000 in cash, digital effects and more than 30 mobile phones were seized by National Police, as well as an electric pistol and documents of importance to the investigation.

The women were under constant surveillance and had no chance of escaping, with videos installed in their rooms. They were made to live alone and moved from one place to another, their travel documents were taken from them and they were threatened as well as their families. Most of them were physically and psychologically abused, and as the abuse was carried out on private properties, it went undetected for a considerable amount of time.