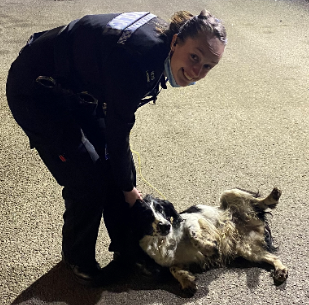 Police worked across three counties to return stolen dog to its owner.

POLICE forces worked together across three counties to see a dog safely returned to its owner after being stolen from a farm.

The Springer Spaniel was taken from a farm in the Hallaton area of Leicestershire at around 10.15pm last night, March 3, and suspects had been traced a couple of hours later in a vehicle, but failed to stop for colleagues from Lincolnshire firearms unit.

Nottinghamshire initiated a pursuit using both forces operational support resources and the vehicle was followed through Newark before being abandoned in Besthorpe.

The stolen dog was found unharmed nearby.

A thorough search of the area was carried out involving firearms, dog units and the Newark response team, but the suspects got away.

Leicestershire Police are now carrying out enquiries, including into the abandoned vehicle, in a bid to establish who was behind the attack.

Chief Superintendent Rob Griffin, of Nottinghamshire Police, said: “We’re taking dog thefts extremely seriously, especially at this current time when there appears to have been a rise in these crimes nationally.

“This incident shows how we work collaboratively with our colleagues across a wide area to track down any suspect and reach a positive conclusion for our victims.

“I’m glad that the dog was unharmed and that we were able to return him safely to his owner within two hours of being stolen.”