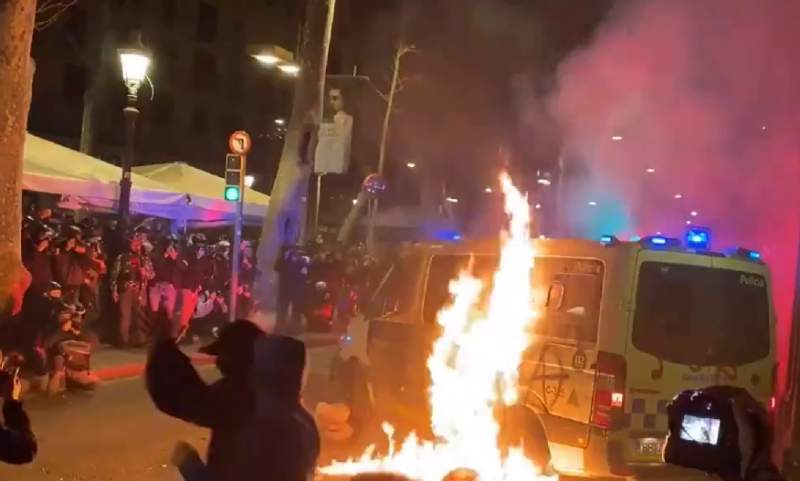 Her lawyer claims she didn't set fire to the van Image: Twitter

Tensions ran extremely high on Tuesday’s episode of Todo es lie which saw the TV host Risto Mejide interview spokesperson for the Arran collective, Adriana Roca, about the recent riots in Catalonia against the incarceration of rapper Pablo Hasel. Arran (Catalan for ‘level with’) is the youth organisation of the Catalan Pro-Independence Left, and Ms Roca appeared on the programme to argue against the use of rubber bullets which resulted in a 19-year-old woman losing an eye.

The host remained unconvinced by the activist’s arguments however, and claimed that while some of her points may be valid, “the moment you use force you are delegitimised.”

Ms Roca claimed that often the police act in such a way as to provoke the demonstrators:

“Many times, it is the very presence of the police forces that generates these forms of self-defence, and this violence that you talk so much about.”

At his comment, the TV presenter saw red, and demanded to know how officers are supposed to de-escalate a violent situation without using violence in return. When the spokesperson asked him what he had to say about the young woman who lost an eye, Mr Mejide’s response prompted a social media storm.

“Whether you are 19, 23 or 40, you have to know what you are getting yourself into. If, after three days of altercations, you go to a place where there are disturbances, you will not get a caress. I doubt that were aiming for her eye.”

His controversial comments have created a social media frenzy; while many people have condemned the presenter for implying that the young girl brought the trouble on herself, others have leapt to his defence.