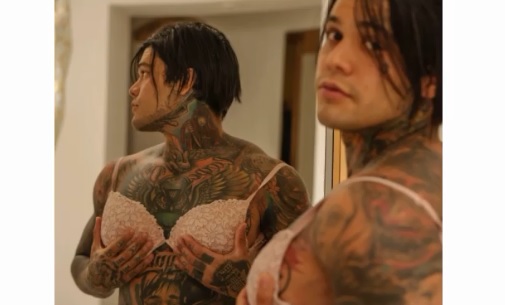 COLOMBIAN influencer Yeferson Cossio, has got silicone breast implants for fun after a bet.

The 26-year-old from Medellin, who has 3.4 million followers on Instagram, bet his brother-in-law, Jhoan Lopez, that he would reach three million fans on the social network and, if he did not succeed, he would get the implants

“Can you imagine getting old and saying that once I lost a bet and got huge boobs?” he said.

He won the challenge in less than a month, but decided to also decided to take the penalty along with his brother-in-law.

“I’m not worried, I already talked to the doctors and they explained that it will not damage my pectoral muscles” he said. “I will leave the implants in for three days and then I take them off, the scar will be small and under a tattoo, so it wouldn’t be noticeable at all” he explained before knowing that he had won.

Just under a month after announcing the challenge, he announced that he had undergone the operation and would show the results. He did so with a fairly explicit video of the operation.

He later published another post showing his new breasts, saying he had done it for fun and would take them out in a week.

While he recorded the reactions of his relatives, his girlfriend jokingly said “it’s not normal for your husband and your brother to get boobs.”

After he was criticised for his decision, he expressed his respect for women who have to undergo breast operations, which he said was the “most painful thing I have ever done in my life.”

He also apologised to the “thousands of transsexuals who save their whole lives for boobs and don’t have enough and then a son of a b**ch like me comes along and gets them.” He added “I apologise for having money.”

Despite the apologies, he made a valid point in saying that as a child, his family was poor, but he never complained that other children got gifts when he didn’t because he didn’t consider it to be their fault. “That’s life” he said, “don’t you feel sorry for taking out your frustration on me on social media?”