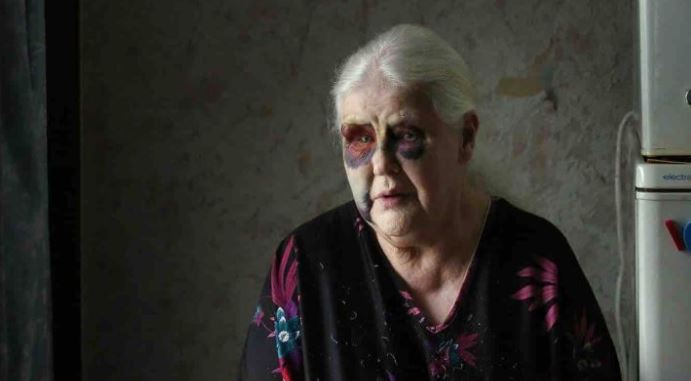 A PENSIONER has been left with horrific bruising after thieves attacked her and tried to steal her mobility scooter from her own home.

The pensioner who has been called courageous was left with horrific bruising after thieves attempted to burgle her Dunston home on Sunday morning. The pair of thieves attacked the old woman who is also fighting leukaemia when she tried to stop them from stealing her mobility scooter.

Ida aged 79, was woken up early in the morning by Henry VIII, her cat when he was disturbed by the burglars outside. The attack took place on Ross Avenue and police are determined to find the culprits. She was left crumpled on the floor with horrendous bruising around her face and eyes after the attack which also injured her knee. The two culprits then fled.

Ida spoke out about the incident and said, “They didn’t manage to steal my scooter but I can just remember them running away and shouting ‘we’ll be back’..

“I have leukemia and just had a pace maker fitted in my heart before all this happened so I do need my mobility scooter to get me around.

“My knee is really painful and I couldn’t open my eye for a few days afterwards. Because of my leukemia I can’t have some of the painkillers so it does hurt a lot.

“My neighbours have been really supportive and Henry is a good guard cat but it is scary knowing that they could come back.

“I know I won’t be opening my door to anyone again because I don’t want to put myself in that position.

“I just hope that the police manage to catch the people who did it because there are lots of elderly people round here and I don’t want anyone to go through what I had to.”

Northumbria police have called on the community to help identify those responsible for the woman’s injuries. Neighbourhood Inspector Alan Davison said, “This is an abhorrent attack on a vulnerable pensioner in her own home and we are determined to find those responsible.

“The mobility scooter would clearly belong to someone with a vulnerability and I find it appalling that anyone would try to take it away from someone in need.

“To then shove an elderly woman into a wall, and cause the level of injury that they have done, is beyond comprehension and I know the wider community will share our anger.

He also went on to say, “There will be people out there who know who is responsible and we would urge you to look at these pictures of Ida and ask whether you are happy for those responsible to evade justice.”