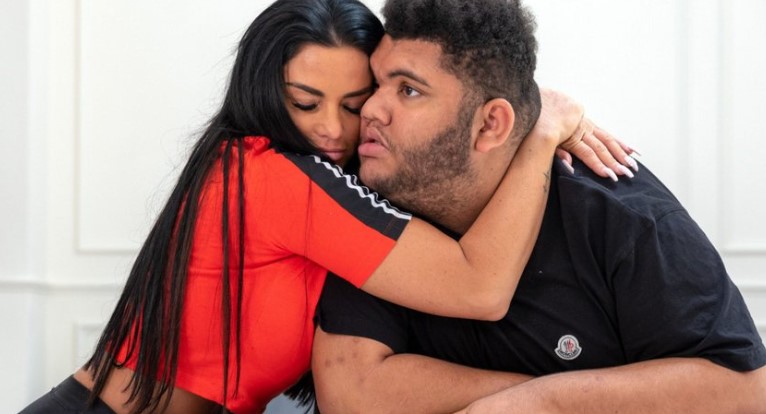 Fans of the former glamour model have heaped on the praise on Sunday, March 7 as Katie Price shared heart-warming photos of her 18-year-old son Harvey, beaming from ear to ear, having visibly lost a lot of weight. The reality TV princess reportedly turned her latest squeeze Carl Woods’ garage into a gym in a bid to help her son adopt a healthier lifestyle.

Katie captioned the photo ‘My gorgeous Harvey’ as the teen sported a black and white tank top from his Born Anxious clothing range.

Harvey was born with multiple disabilities including blindness, ADHD and Prader-Willi syndrome, which causes him to continuously crave food, and the youngster tipped the scales at 29 stone in 2020, causing mum Katie to voice her very real concerns about his weight.

Katie said: ‘He needs to lose weight or he’ll end up dead. He doesn’t deserve that. I don’t want to lose him… I will do anything to help.

Former football pro Dwight Yorke is the biological father of Harvey Price. After a brief relationship with Katie in 2001, their son was born.

But the latest social media pics seem to indicate that Harvey is working out, and is shedding the pounds as well, leaving fans delighted at his progress.

One fan wrote: ‘Harvey looks like he has lost weight. He looks great! Love the top xx… Harvey’s lost weight!

A third person commented: ‘Harvey is looking so well he looks like he has lost weight Great young man Xx… Look at the weight he’s lost. Amazing Harvey.’

In December, Katie and Carl told OK Magazine that they had decked out the garage with gym equipment and enlisted the help of professional dieticians to overhaul Harvey’s lifestyle. At that point, the proud mum announced that he had already lost eight pounds in just a week.

‘We’ve got some gym stuff for him and put it all in Carl’s garage,’ Katie said.

‘Prep Kitchen are also going to send meals to his school. We want to try anything to help him lose his weight. He’s lost 4kg this week, so at least he’s lost something.’