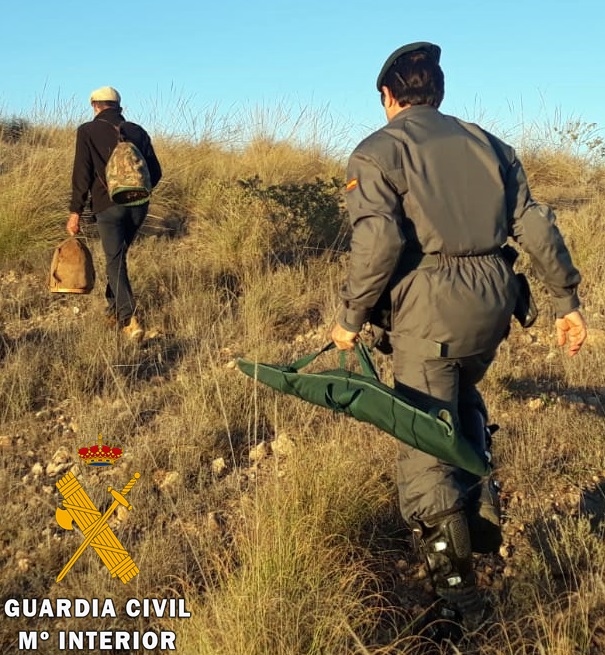 NO PAPERS: Hunter was unlicensed, uninsured and lacked permission to use the game reserve Photo credit: Guardia Civil

Not licensed GUARDIA CIVIL officers who stopped a 55-year-old man shooting partridge in Nijar found that he was uninsured, lacking both a hunting licence and a licence for the shotgun, which was his brother’s.  On identifying him, they also discovered that he was fined earlier for driving without a licence.
Still there BOTH belong to the Partido Popular party, but months of confrontation between Roquetas mayor and councillor Francisco Gutierrez finished with the latter resigning his post at the head of the Urban Development department. He will retain his council seat but attend only council and committee meetings.
Job done SPAIN’S rail operator, Adif, has finally finished the three-year renovation of Almeria City’s unused 19th century railways station.  The €2.51 million cost was met by the Ministry of Culture but the station’s future is undecided although city hall hopes to use the building for cultural or other purposes.
Never forget LA MOJONERA town hall will commemorate the babies born in the town during 2020 by planting a coppice of trees that will include a plaque with their names.  Originally intended to mark their births in the pandemic year, the town hall hopes to continue the practice each year.
Big buy ALMERIA city hall has informed Spain’s postal service Correos of its interest in buying the former main office building in the city centre.  Urban Development councillor announced that the acquisition had been given the go-ahead and both parties are planning to begin negotiations “in the weeks ahead.”
Busy road ADRA town hall will install a roundabout at the crossroads between Avenida Mediterraneo and Camino del Ingenio.  Describing this intersection as “conflictive,” Adra’s mayor said the €50,000 project, which is to be part-financed by the Diputacion provincial council, would improve traffic flow on the busy road.