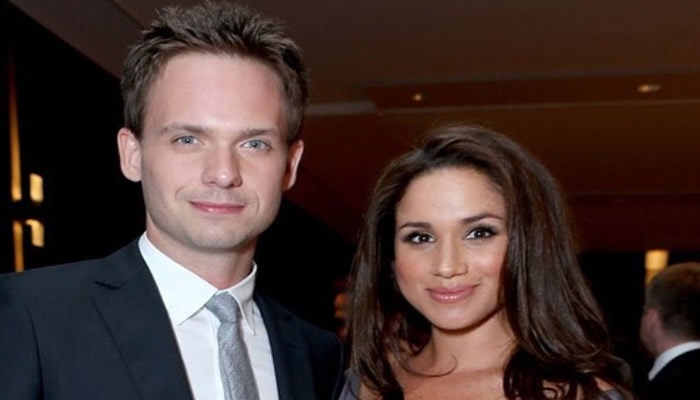 Patrick J Adams starred as ‘Mike Ross’ opposite Meghan Markle’s character ‘Rachel Zane’ in the legal drama ‘Suits‘, and on Friday (March 5) he took to Twitter in defence of his former co-star, amid the current allegations of bullying she has faced, calling her an “enthusiastic, kind, cooperative, giving, joyful, and supportive person”.

At the same time, Adams accused the royal family of being “obscene” for “promoting and amplifying accusations of ‘bullying’ against a woman who herself was basically forced to flee the UK to protect her family and her own mental health”.

In response to Adams’ comments, Piers Morgan, a fierce critic of Meghan Markle, tweeted, “Actually, what’s ‘OBSCENE’ is your friend trashing her husband’s family on global TV as the Queen’s 99-yr-old husband lies in hospital. How dare you attack our Royal Family like this, you jumped-up little twerp”.

The Good Morning Britain host finished his rant by adding, “Meghan Markle’s showbiz mates who flew over and grovelled up to the Royals at her wedding now publicly trashing the Monarchy – and suggesting it be abolished. Disgusting”.

Adams also tweeted saying he was “sickened by the endless racist, slanderous, click-baiting vitriol spewed in her direction from all manner of media across the UK and the world”.

He went on to describe “this newest chapter” as what he views as “just another stunning example of the shamelessness of an institution that has outlived its relevance, is way overdrawn on credibility and apparently bankrupt of decency”.

Ending his thread with, “Find someone else to admonish, berate and torment. My friend Meghan is way out of your league”, as reported by express.co.uk.

Thank you for taking the time to read this news article “Piers Morgan Hits Out At Meghan’sSuits’ Co-Star Patrick J Adams On Twitter”.