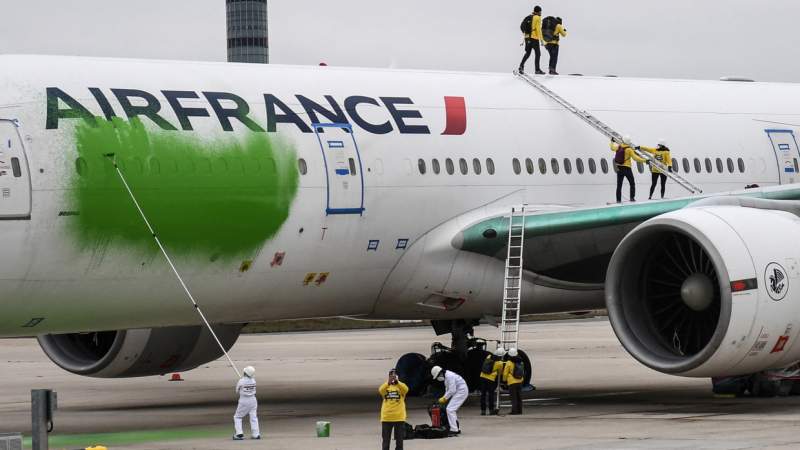 Nine Greenpeace activists were arrested for vandalising an Air France jet with green paint Friday as part of an eco-protest that raised serious concerns about airport security. Aeroports de Paris (ADP), the body that runs Paris’ airports, said the activists got inside Charles de Gaulle airport by scaling a fence at the edge of the tarmac.

The nine members of the environmental group climbed over a fence guarding the perimeter of the airport’s tarmac, dressed in yellow and white, the activists targeted an Air France Boeing 777 which was parked without passengers- and apparently without security!

Using a paint roller mounted on a long pole, the eco-warriors began covering a section of the aircraft in green paint. Others used ladders to climb up to the top of the plane, where they unfurled banners that read: “Is there a pilot to save the climate?” and “the solution: fewer planes.” The video below is courtesy of Greenpeace France.

The group claimed the stunt was a denunciation of the French government’s “greenwashing” of issues concerning environmental regulation and climate change. They also demanded a reduction in air traffic and condemned efforts to characterize air travel as eco-friendly.

Security personnel eventually arrived at the scene after several minutes, although it’s not clear if any arrests were made. According to AFP, several of the activists refused to climb down off the plane after being ordered to do so.  Supporters applauded the stunt, but others saw it as an act of vandalism that raised some serious security questions.

“So guys from Greenpeace can approach Air France planes like that? Really reassuring for safety,” read one comment.

Others joked that passengers have to almost strip “naked” to get through airport security, but somehow the activists were able to seemingly waltz onto the tarmac undetected.

The environmental finger-pointing comes at a time when the aviation industry has seen an unprecedented collapse in air travel due to Covid-19 restrictions. Last month, Air France-KLM reported that in 2020, passenger numbers plummeted by 67 per cent, resulting in a nearly 60-per cent decrease in revenues. CEO Benjamin Smith described the current lull as “the most severe crisis ever experienced by the air transport industry.”