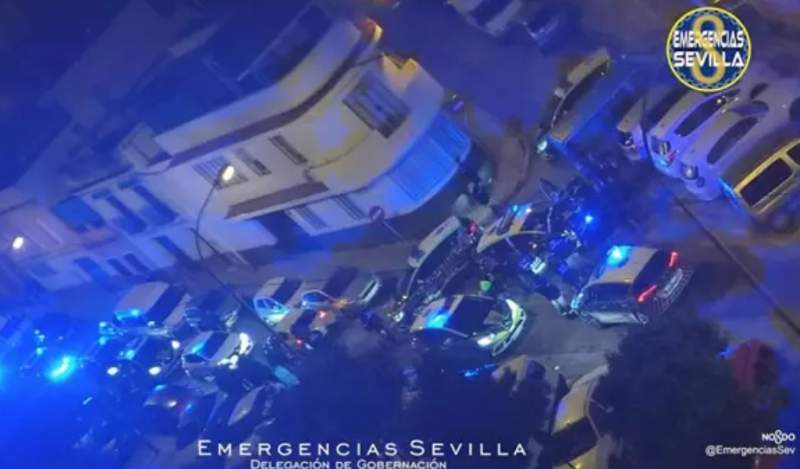 Sevilla Local Police, in the early hours of Saturday 6, arrested two men, aged 30 and 43, with 23 previous arrests between them, for robbery, injuries, reckless driving, and resisting arrest, after being responsible for a long car chase through the streets of the Cerro del Águila neighborhood.

The incident began when a patrol was driving along Hytasa Avenue, in the Cerro-Amate district, and its officers observed how the driver of a vehicle coming towards them from the opposite direction tried to hide his head so as not to be seen or recognized by them as they passed.

As the patrol turned around to flag the suspect car down, so began a long pursuit of the driver, in his car, through the streets of Cerro del Águila, during which they drove on the wrong side of the road along several streets, going through red lights and ignoring all attempts by the patrol car to come to a halt.

During the chase, they collided with a VTC vehicle parked on Vasco de Gama street and also hit a patrol car that was trying to cut off their path on Carmen Vendrell street.

After ramming another patrol car, the Local Police finally managed to stop them on La Puebla del Río street, where they again rammed the first damaged patrol car that was cutting off their escape route, quickly reversing and again colliding with the second patrol car that was again cutting him off, where he escaped again, before finally being intercepted.

A 43-year-old man who was a passenger in the stopped car resisted arrest by the officers, and a 25-year-old girl who was also an occupant was released after being identified.

Once identified, it turned out that the 30-year-old driver had an outstanding arrest order against him from a Coria del Río Court, so after being transferred to the police station he was arrested.

A search of the vehicle by the local police officers uncovered typical tools used for burglaries, including crowbars, a hammer, and pliers, and the car was eventually towed to the local Municipal Deposit, where a trace discovered there is the possibility that the car was stolen, not ruling out another criminal charge against the driver.

Two officers were injured during the incident and were treated in a medical centre, while two patrol cars were damaged, along with the parked VTC, the owner of which has been informed by the police of the necessary actions to be carried out, as reported by europapress.es.

Thank you for taking the time to read this news article “Sevilla Police Car Chase Ends With Two Men Arrested”.