Woman who saved drowning dog has praised the community’s team rescue effort as the dog’s owner is sentenced for causing unnecessary suffering.

BELGIAN Shepherd Bella was rescued from the River Trent, when dog walker Jane Harper saw her struggling and submerged in the water with a lead attached to a large rock under the water.

Jane and her friends managed to free the struggling pet after spotting it splashing in the water, calling others to get towels and blankets to keep her warm.

Speaking after the dog’s owner appeared in court yesterday, Monday, March 8, Jane paid tribute to the RSPCA and Nottinghamshire Police for helping to save Bella’s life.

She said: “I honestly don’t know how she survived. She was in such a bad way. She was just a dead weight and in a terrible state. 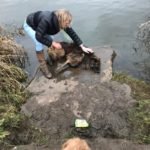 “It was such an emotional experience, first spotting her and realising we had to get her out. When I first saw her, I thought she was dead. I was trying to talk to her and lift her out, but she wasn’t responding.

“Then her eyes moved and I thought I’ve got to help this dog. It was a real struggle and we had to call others to get her out because of the weight. I soon realised this was a deliberate act and not just an animal in a tricky situation.

“Her coat was so thick and she had no strength, but we just kept talking to her and keeping her calm. It was a real team effort.”

The police and the RSPCA took over from there and got Bella treated “remarkably quickly.”

“Without that urgency, I’m sure she wouldn’t be here today. It’s quite remarkable,” said Jane.

“It feels great that she’s now got a chance to spend her last few years with a loving family. It would be so nice if she was giving so much love and attention in her remaining years. That’s all she needs.” 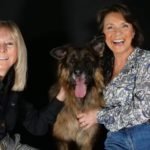 After being freed from the rock on January 6, 2020, near Long Lane, Farndon, police officers took her to a local vet for emergency treatment.

She was then transferred into the care of the RSPCA Radcliffe Animal Centre in Nottingham while the police and animal welfare charity launched an investigation.

The dog was rushed for emergency veterinary treatment and it was there that Bella’s microchip was found which was registered in 2010.

Bella’s owner Charlene Latham was arrested by police and appeared at Nottingham Magistrates’ Court where the 32-year-old from Ilfracombe, Devon, was sentenced to a 12-month community order after she pleaded guilty to causing unnecessary suffering to Bella by attempting to drown her.

She was also disqualified from keeping dogs for three years.

Bella, aged 11, has remained at the centre ever since as she has complex veterinary needs but she has been completely transformed from the dog who almost didn’t make it to the bouncy elderly girl she is now.

Ella Carpenter, manager at Radcliffe Animal Centre, said after the case that they are now desperate to find Bella a loving new home.

She said: “We are both proud and privileged to have cared for Bella over the past 14 months.

“At times we thought she just wouldn’t make it, with her age and underlying health conditions all against her. But Bella has fought every day, showing enviable strength and courage, not wanting to give up her fight to recover.

“We are appealing ideally for a local home for Bella so that we may assist in supporting her ongoing care due to the complexity of her needs.”

Inspector Heather Sutton, District Commander for Newark and Sherwood, said: “Britain is undoubtedly a nation of animal lovers, which has been demonstrated by the overwhelming support we have received from members of the public to help Bella and assist our officers with their investigation into this particularly sad case.

“I would like to thank the public for their support, which has meant that we were able to make arrests and charges following the investigation.”