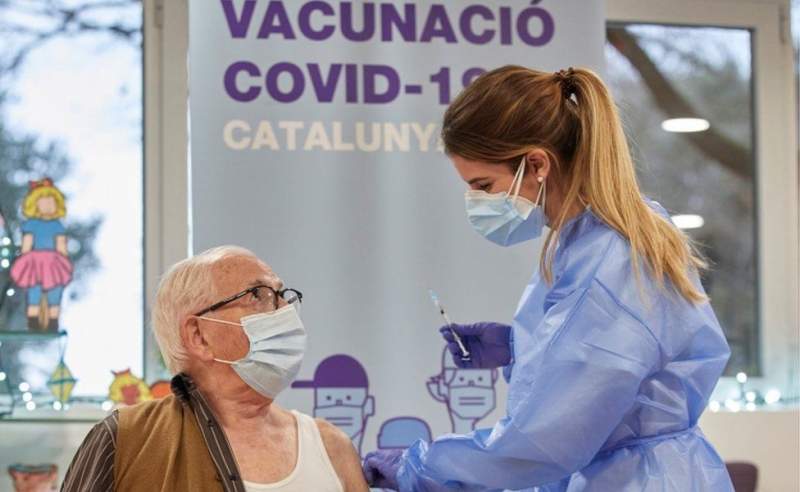 Catalonian Health Service In Rush To Vaccinate Over 60s In Case Of New Coronavirus Wave.

One in five Catalans (20 per cent) now has “some type of antibodies to the coronavirus,” says the Secretary of Public Health, Josep Maria Argimon, due to having suffered from Covid or from receiving the vaccine. But, with each passing day, the impatience to give the injection grows, especially among older people, who are anxious to know when it will be their turn.

Salut, the health authority, is also in a rush to immunise those over 60 in case there is a fourth wave of the epidemic as most of those admitted to the ICU are aged between 55 and 75 years old.

So there is an expectation now to use the AstraZeneca vaccine in those over 55 and also to have the newly approved one from Janssen. “They would help speed up vaccination” the acting health minister, Alba Vergés, said. Having four vaccines without age limits would allow “a mass vaccination that is more comfortable and easier to organise,” he added.

Both Vergés and Argimon pointed out that it seems that many more vaccines will arrive. For next week, 150,000 doses are expected: tomorrow 42,000 of Moderna should arrive; on Monday, 84,240 from Pfizer, and that same day or Tuesday, 24,700 from AstraZeneca. Janssen is not expected for another two weeks. In the current situation, this is how the schedule for the injections could go:

Older than 80 years, first, and 70 and 60, later. Between February and June, while nursing homes and health personnel have just been vaccinated (66 per cent have already had two doses), large dependents and people in-home care are injected (84,647 people, 54 per cent already with one dose), as well as those over 79 years of age: of 362,422 only 21 per cent have taken the first dose.

On Tuesday, March 9, the person in charge of vaccination, Carmen Cabezas, warned that they must start giving second doses, so in the next two weeks, little progress will be made. After that, those over 79 years of age, people aged 70-79 and those aged 60-69 will be called.

These groups could benefit if the AstraZeneca age limit is removed and many doses of Janssen arrive. But Salut will have to decide who to inject with each type of vaccine, a complicated logistics issue.

Those from the age of 55 to 65 – Vergés stated that as soon as the AstraZeneca vaccine can be used in those over 55 years of age, essential workers (teachers, policemen, health professionals) of those ages will be called in.

The vulnerable and the sick.

Catalan hospitals began to vaccinate transplanted patients or those waiting to be transplanted (of any age) a few weeks ago, the idea is to continue with those on dialysis and receiving cancer treatment.

Health agreed yesterday to extend the system to other patients at risk and give them the injection at the same time as the population of 70-79 years. The group will include other seriously chronically ill or people over 40 with Down Syndrome.

As of June, mass vaccination of the population who are under 60 years of age is expected. It will be done in large facilities – Argimon spoke of the Camp Nou football stadium, the Sagrada Família, and large museums or public areas.

By then, it will be necessary to decide (throughout the European Union) if children are to be vaccinated (those with serious pathologies could already be included in the vulnerable group). Some pharmaceutical companies are already doing new trials with children to see the efficacy of their vaccine since they did not include children under 16 years of age in the first studies.

It is still mandatory to wear masks during the pandemic, Amazon have a great range in stock, click on the link to see them all.https://amzn.to/3826Rmr