Portugal’s President Marcelo Meets With The Pope In The Vatican 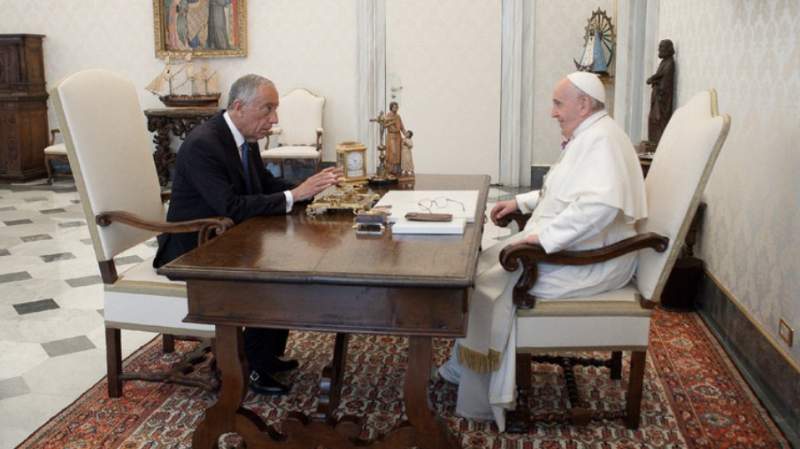 Portugal's President Marcelo Meets With The Pope In The Vatican. image: the vatican

PORTUGAL’S President Marcelo Meets With The Pope In The Vatican

President Marcelo, starting his new mandate as the President of Portugal, today, Friday March 12, had a meeting in the Vatican with the 83-year-old Pope Francis, where he will reportedly use his charm to try and get the pontiff to return to Portugal in 2023, to visit Lisbon and Fátima on World Youth Day.

There had been rumours yesterday of a rift between the president and his prime minister António Costa, when, after the PS Socialists’ government’s announcement of their proposed roadmap out of the coronavirus lockdown, Mr Marcelo didn’t seem to throw his support behind it.

But, today, he totally denied there was any rift, and said that now that he knows the full details of the roadmap, he considers the plan “reasonable and prudent”, saying that the slow progress planned between now and May, “is good, in that it isn’t too far away, it’s flexible in the indicators that it has chosen and in the way they are connected and it assures Easter is ‘closed’, which is important”.

Indeed, “it’s a much more careful plan” than the one he had been led to believe was coming, he commented, so it would seem that everything is once again cool at the top of the political landscape in Portugal for the time being.

Mr Costa announced yesterday that starting on Monday, March 15, children will be going back to creches, pre-schools and primary schools; local commerce of all kinds can start sales from the door/ open window; hairdressers, manicure parlours can reopen, as can bookshops, auto stands, estate agents and libraries.

As has been explained during the course of this week, the idea is to open up slowly, giving two weeks between each step of the de-escalation of the lockdown, but, he stressed, if at any point the rate of infections increases beyond 120 cases per 100,000 inhabitants, authorities will have to signal a ‘step back’.

Until April 5, the country is expected to keep to the current rules of staying at home as much as possible. Weekends will remain ‘confined to boroughs of residence’ with the usual reduction in business hours until after the long weekend of Easter.

Thank you for taking the time to read this news article “Portugal’s President Marcelo Meets With The Pope In The Vatican”.