PUBS AND THEIR SIGNS 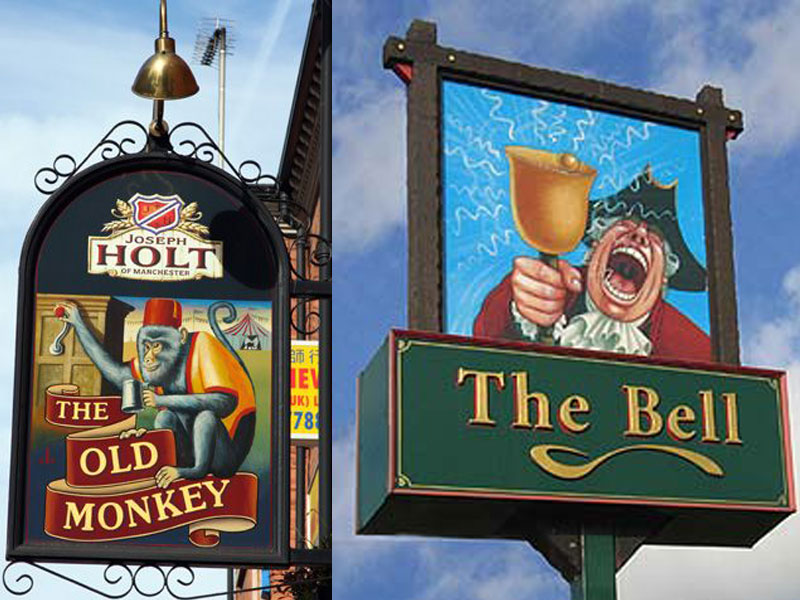 A retired comedian in our village opened a pub and tried to register its name as The Three Poofs. Even in the liberal swinging 60s, freedom of expression did not extend that far. Perhaps he would have got away with The Two Poofs. Today, the very idea of anybody even submitting such an application is about as likely as a pantomime horse winning the Grand National.

The identification of inns by their names and their signs goes back to the middle ages, when many houses displayed a sign, often denoting some heraldry, which indicated that the premises were under the special care and control of a nobleman or landowner. The sign would portray a vivid image that impressed the theme on the memory. Hence the names were taken from images incorporated in coats of arms, family crests etc.

Alternatively, The Plough, The Harrow and The Stag all conjure up rural images of a bygone age. But many new pubs and signs which opened in the modern era are not tied by such traditions.

Why, in the last hundred years, has the more recent naming of pubs been so unadventurous – so repetitive? In the 60s there were hundreds of pubs in England called The Crown, The Bell and The Swan. Not so many were called The Stetson, The Foghorn or The Puffin. The Duke of Wellington is still proving far more popular than The Mayor of Huddersfield. The George is preferred to The Cuthbert.

With a little imagination there could have been so many colourful alternatives. The Purple Penguin (rather than the Red Lion), The Thrush and Manhole (for The Rose and Crown), The Twenty Bottles (The Three Tuns), The Cleaner’s Knees (The King’s Arms or The Queen’s Head).

Of course, there are an increasing number of pubs which have broken ranks. The Old Monkey in Manchester for example and The Old Devil near Maidenhead are refreshing changes from The New Inn.

The Ape and Apple (Manchester) and The Queen’s Head and Artichoke (London) are two further innovative examples. In Cornwall there is a pub called The Bucket of Blood; this is also the name of a beer brewed in the area, marketed as “a spookily spicy red classic ale which has become a feature of Halloween. It is full with a malty toffee palate and a good bitter skeletal backbone finish.” Hmm, thanks, but I’ll go for a pint of London Pride.

I have also seen a pub with an advertisement outside. “Seven-course Irish meal – six pints and a potato.” It sounds more inviting than six potatoes and a pint.