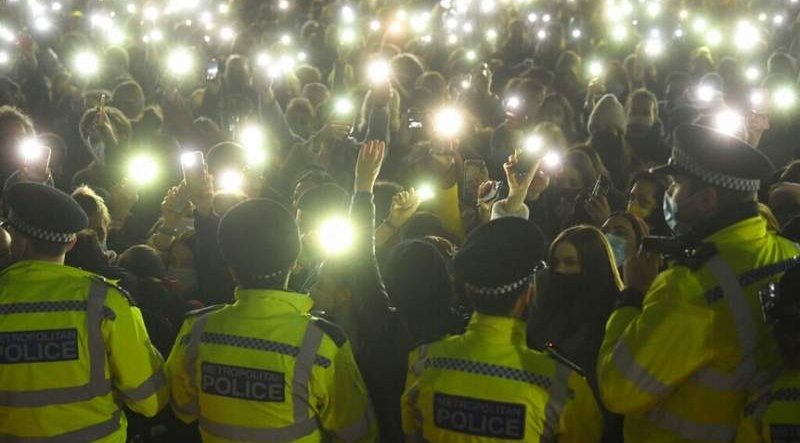 London police stormed in to disperse crowds at a memorial for murder victim Sarah Everard last night after warnings that vigils and protests about violence against women would breach COVID-19 restrictions.

Police told organisers of events planned in London and around the country to honour Ms Everard that public gatherings would be in breach of COVID-19 lockdown rules and could lead to fines up to €15,000

However, thousands of supporters — including the Duchess of Cambridge — went to Clapham Common during the day to leave flowers and drawings at a memorial to Ms Everard, whose killing has sparked widespread anger about women’s safety.

Organisers at Reclaim These Streets said they had cancelled a vigil on Clapham Common in south London near where Ms Everard, 33, was last seen 10 days ago. Other events around the country were also cancelled. The group said they were “deeply saddened and angered” by the police’s actions and criticised officers for “physically manhandling women at a vigil against male violence”.

“It is their responsibility to protect public order, public health and the right to protest – they failed tonight on all accounts,” the group added in a statement. The Met said it was the “only responsible thing” for them to do to ensure public safety.

The force added that a review will be carried out to see if “lessons can be learned”. One video posted online showed officers removing women who were stood in the bandstand. Cries of “shame on you” and “let them go” could be heard from onlookers.

Labour Leader Keir Starmer wrote on Twitter that the scenes were “deeply disturbing”.

He added: “Women came together to mourn Sarah Everard – they should have been able to do so peacefully. “I share their anger and upset at how this has been handled. This was not the way to police this protest.”

Sadiq Khan, the Labour Mayor of London, said the scenes were “unacceptable” and that he was “urgently seeking an explanation” from the commissioner.

“The police have a responsibility to enforce Covid laws but from images I’ve seen it’s clear the response was at times neither appropriate nor proportionate,” he tweeted.