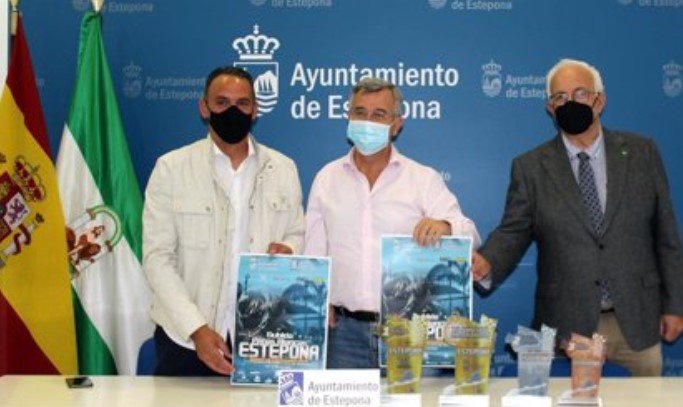 The mayor of Estepona, José María García Urbano, along with Manuel Alonso, the president of the Andalucían Automobile Federation, and Rafael Arjona, the representative of RS Sport, the organizers of the event, today, Monday 15, presented the press conference to launch the XII Automobile Ascent to Peñas Blancas, to be held in the town from March 19 to 21, and which this year has a novelty new stage that will allow the champions of each autonomous community to compete.
The competition, which is included in the Provincial Automobile Championship III Diputación de Málaga Trophy, will count towards points for the Andalusian Mountain Championship of the Andalucían Automobile Federation.
This year’s novelty is the ‘Subida de Campeones’ stage, which will see the arrival in Estepona the No1 drivers in mountain motoring – in the tourism class – from various autonomous regions of Spain.
During the weekend you will be able to witness the skills offered by drivers such as the Andalucían champion, Humberto Janssons with his Porsche 911 Gt3 CVP, Francisco Jiménez Bermúdez, the Madrid champion, with his Mitsubishi Lancer Evox, José Antonio López Fombona from Castilla-León, the multi-time champion of Spain, driving his Lamborghini Huracán, José Antonio Sánchez Sánchez, the champion of Murcia, driving his BMW 328i E36, and Pedro L. Mayol Planchadel, the champion of the Canary Islands, with his Norma M20F, among others.
With this prestigious event, Estepona will once again become the centre of attention in the motoring world, featuring one stage that is the longest route of the championship, 7.6 kilometres in length, a difference of 481 metres, with an average slope of 6.39 per cent and a maximum slope of 12.39 per cent, the organisers pointed out.
This test stands out for its exceptional characteristics, for the beauty of its landscapes, and for its spectacular nature, since it presents a complex route that represents a challenge for participants. In short, it is a route that is very pleasant for driving, while requiring the drivers to have good driving skills and techniques, as reported by malagahoy.es.
_______________________________________________________
Thank you for taking the time to read this news article “Estepona Holds The 12th Annual Peñas Blancas Hill Climb Car Event”.
For more UK daily news, Spanish daily news and, Global news stories, visit the Euro Weekly News home page.