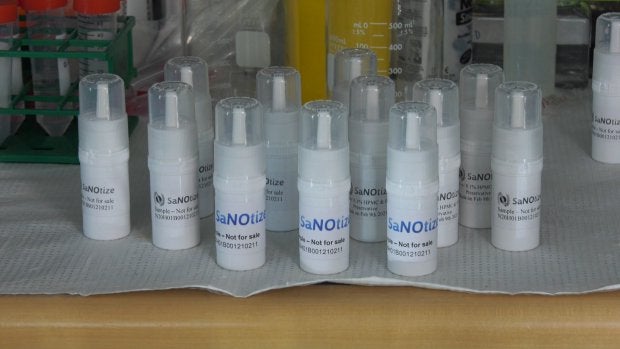 A BIOTECH firm from British Columbia, Canada, is seeking federal approval for the emergency use of its nasal spray product after stating that they had developed an effective treatment for anyone who has contracted Covid-19.

Vancouver-based SaNOtize has found that its nasal spray, which is said to reduce Covid levels, has a 95 per cent efficiency rate within 24 hours, and more than 99 per cent in under three days. The firm has been studying the effects during clinical trials for months, according to one of its co-founders.

“When you use the nasal spray, it really kills the virus in the nose, and reduces the viral load,” said Dr Gilly Regev.

SaNOtize’s other co-founder, Dr Chris Miller, said using the spray could mean milder symptoms and a potentially quicker recovery for anyone with Covid-19.

“You get exposed, you test positive, and you take this. Within a day, or two days, or maximum four days, you’re back out on the street,” he told CTV News. He said that when treated quickly enough, the virus was killed before it could spread to the lungs.

The nasal spray contains nitric oxide, which is known to act as a disinfectant and is produced naturally in humans. No one reported any side effects during the nasal spray’s trial phase.

The developers say it can be used worldwide, as an added layer of protection against Covid-19.

“It will be another tool in your toolbox. Just like you have your hand sanitiser and your mask, you will have your nasal spray. The idea is that it’s not instead of the vaccine, it’s to augment the vaccine,” explained Regev.

Testing also found the spray works against the Covid-19 variant B.1.1.7 that originated in the UK.

“We believe this will also be effective against all other variants,” added Miller.

SaNOtize is now seeking federal approval for emergency use of the nasal spray in the UK and Canada. The biotech firm also plans to run another set of clinical trials in the coming weeks, to prove the spray not only kills Covid-19 in the body, but can also prevent people from contracting the virus.