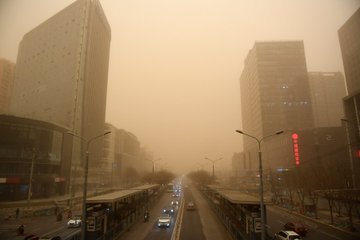 South Korea blanketed by a massive yellow dust storm blown in from China.

ALMOST all of South Korea was shrouded in yellow dust today, Tuesday, March 16, which had originated from the inland deserts in northern China, according to the state weather agency.

The Korea Meteorological Administration (KMA), said that practically all parts of the nation were affected by high levels of yellow dust that originated in the Inner Mongolian region in northern China and the vicinity of the Gobi Desert over the weekend and was moving south by riding the northerly wind.

It is forecast to weaken tomorrow, but may continue to be a problem depending on the flow of atmospheric pressure on the Korean Peninsula.

Beijing and other Chinese cities were blanketed by what the local weather agencies call the biggest sandstorm in a decade, reports The Korea Herald, due to the same winds blowing in from the Gobi Desert and nearby regions.

The average hourly concentration of fine dust particles smaller than 10 micrometres in diameter, known as PM 10, rose to 139 micrograms per cubic metre in Seoul, 168 micrograms on Jeju Island, 123 micrograms in Incheon and 153 micrograms in Gyeonggi Province this afternoon.

Authorities issued a fine dust advisory for 10 cities and counties in the southwestern province of South Jeoll as the hourly average of PM 10 surged to 224 micrograms in those regions.