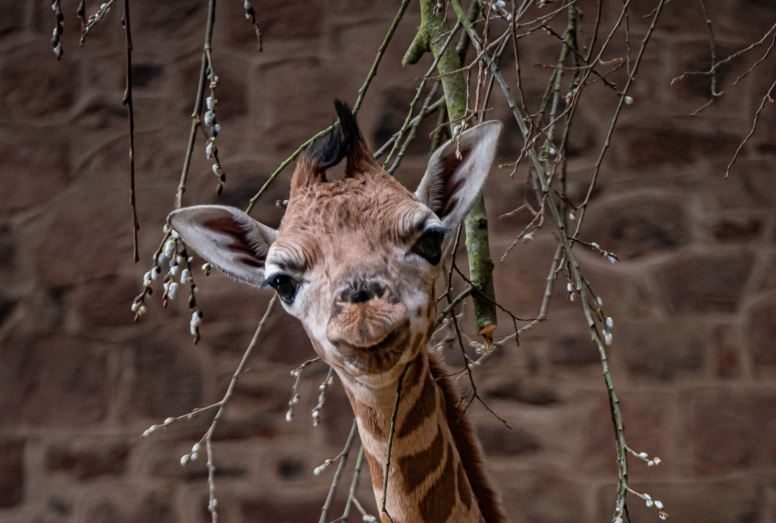 A rare baby giraffe has been born at Chester zoo to mum Orla. The new baby arrived on March 3, at 3am, and was welcomed to the world by landing on fresh soft straw after dropping from a height of about two metres.

The new baby calf is a male and he was seen to take his first few wobbly steps. The calf already comes in at around 6 ft tall and weighs a staggering 70 kilograms. It is expected that he will grow to 18 feet tall, and that he will eventually way over 1,000 kilograms.

Sarah Roffe, Giraffe Team Manager at the zoo, spoke about the birth and said, “Giraffes give birth standing up and so their young receive quite a welcome to the world, dropping around six feet to the ground. Although this seems like a long way, the fall actually breaks the umbilical cord and helps to stimulate the calf’s first breath – it’s a dramatic entry but it’s just how they do it!

“The new calf has arrived at the end of a 15-month pregnancy for mum Orla and already he stands at 6ft – he could grow to be up to 18ft tall. Orla, an experienced mother, has slipped back into the role like a natural. She’s doing everything right, and it’s lovely to see the close bond between the two of them.”

The calf has been welcomed into a lovely family unit and Sarah said, “This latest arrival joins a group of eight Rothschild’s giraffes at the zoo and it’s always an exciting time for the herd when a new calf arrives. Two of the older females, Dagmar and Tula, appear to have taken on the role of protective aunties, helping Orla to watch out for the newborn. The other youngsters in the group love running around together and so, as soon as the calf starts to increase in confidence and venture outside, I’m sure they’ll enjoy having a new playmate around.”