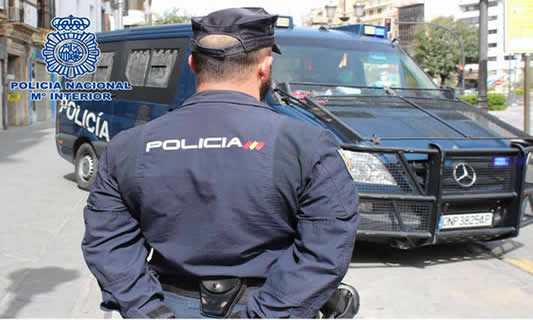 National Police officers in Granada have arrested a 20-year-old man of Moroccan nationality, with a previous police record, on suspicion of breaking into a total of 14 vehicles that were parked inside a car park in the city and stealing their contents.
The police investigation was initiated after somebody called the CIMACC-091 emergency services number, to report observing numerous vehicles inside a car park, all with their windows smashed in, and upon their arrival at the scene, officers counted 14 vehicles that had been broken into and clearly had contents stolen.
A quick check of the security cameras uncovered the presence of a male who had been seen loitering at night among the vehicles parked in different parts of the car park, and the officers noted his identity for their investigations.
The officers were even more surprised at seeing the male in the video as they recognised him from earlier in the day when they had stopped the same young man in the street at around 6.30am after seeing him with a cut and bloodied left hand.
Several of the vehicles had traces of blood, and footprints were found on the seats, while his robbery spree didn’t earn him very much, in fact, all he found in the cars was a small amount of loose change in coins, while the owners reported losing a pair of work shoes, a thermos glass, a pair of sports shoes, and a business card, and the youth has now been detained awaiting facing a judge, as reported by granadadigital.es.
_______________________________________________________
Thank you for taking the time to read this news article “Granada Police Arrest Youth Who Broke Into Fourteen Cars”.
For more UK daily news, Spanish daily news and, Global news stories, visit the Euro Weekly News home page.