Icelandic Volcano Erupts After Laying Silent For Over 6,000 Years 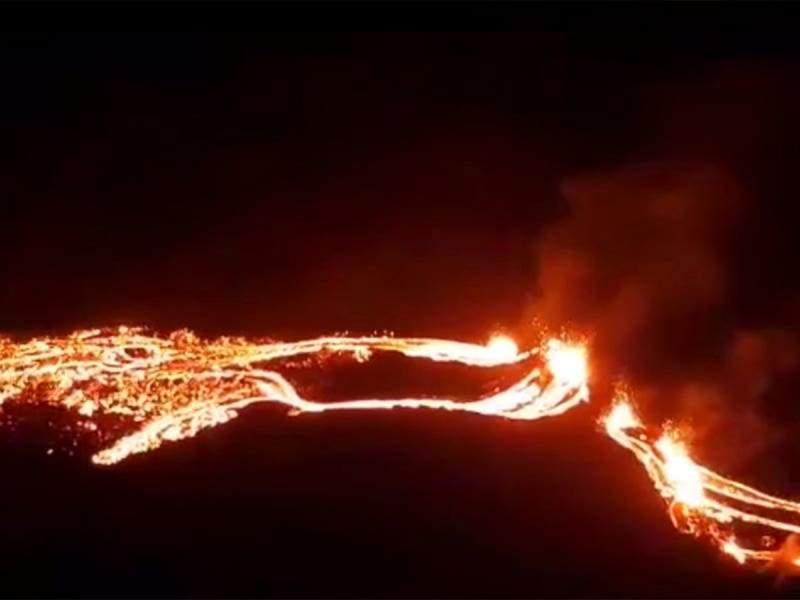 Icelandic volcano erupts after laying silent for over 6,000 years.

A volcano situated in the south-west of Iceland has erupted and spilled lava for the first time in over 6,000 years.

Initial aerial footage from the Icelandic Meteorological Office showed a relatively small eruption as two streams of lava ran in opposite directions down the Fagradals Mountain volcano on the Reykjanes Peninsula.

The Department of Emergency Management said it was not anticipating evacuations because the volcano is in a remote valley about 1.5 miles from the nearest road. The glow from the lava could be seen from the outskirts of Iceland’s capital, Reykjavik, which is about 20 miles away.

The Reykjanes Peninsula hadn’t seen an eruption of any volcano in 781 years, though there had been signs of a possible eruption recently, with earthquakes occurring daily for the past three weeks. However, volcanologists were still taken by surprise because the seismic activity had calmed down before the eruption. The eruption is located in the middle of the peninsula, which connects the capital of Reykjavik to the Keflavik International Airport near its tip. The area is also near the popular Blue Lagoon hot springs resort, although there is no indication yet of any people or property being at any risk.

Earthquake activity in the region had been lower in the days leading up to the eruption and there are no reports of any ash fall yet. The eruption still spurred local authorities to change the volcanic flight colour code to red, which indicates that an eruption is occurring.

“Additional domestic restrictions have been put in place, including the closure of Reykjanesbraut – the main road from the capital region to Reykjanesbær and the international airport at Keflavík,” the IMO writes.

Webcam images shared on social media seem to show a glowing red night sky reflecting the eruption as seen from Keflavik. Gases emitted by the eruption and the possibility of rock particles explosively ejected from the fissure remain potential dangers.

Icelandic police are asking people to stay away from the area of the eruption for the time being.

Iceland is among the nations in the world with the highest levels of volcanic activity. Major eruptions were seen on the island in 2014 and in 2010 when Eyjafjallajökull shot copious amounts of smoke and ash skyward, causing major disruptions to air traffic.