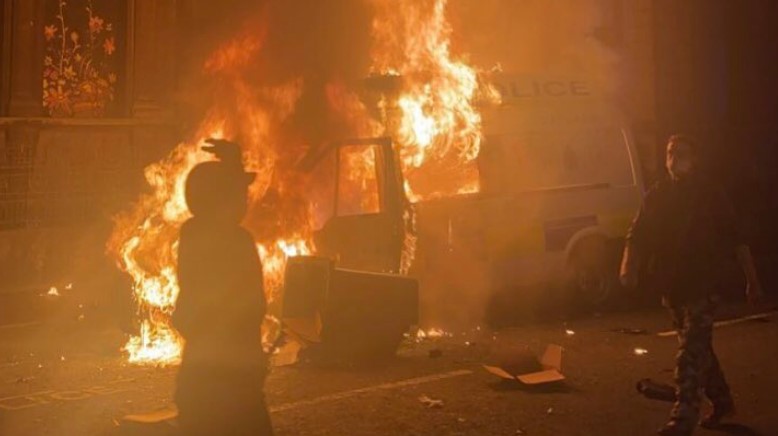 The demonstrations that turned violent in Bristol earlier this afternoon have got uglier as the day goes along.

Dan Whitehead, a Sky News correspondent who is at the scene, said a number of protesters remained at the police station and around 500 in total were still on the streets, adding, “I’m standing next to a whole row of police officers with riot shields, some sprayed with graffiti – words against the police all over their riot shields”.

Mr Whitehead continued, “There’s a lot of smashed glass everywhere, fireworks set off in the street and you can see the smoke rising from the police van that was set on fire outside the police station. This is a very serious situation which has resulted in police officers getting injured and the police station’s windows smashed in”.

Marvin Rees, the Mayor of Bristol called today, “a shameful day in an incredible year for Bristol”, while Andy Roebuck, the chairman of Avon and Somerset Police Federation said, “Disgusting scenes in Bristol by a mob of animals who are injuring police officers, members of the public and damaging property”.

Continuing, he said, “Avon and Somerset Police Federation are attending stations to support officers. We have officers with suspected broken arms and ribs. This is so wrong. Smashing buildings in our city centre, vandalising vehicles, and attacking our police will do nothing to lessen the likelihood of the Bill going through”.

Will White, the Chief Superintendent of Avon and Somerset Police commented, “What started out as a peaceful protest has been turned by a small minority into violent disorder. These scenes are absolutely disgraceful and they will be widely condemned by people across the city. There can never be any excuse for wanton disorder”.

Home Secretary, Priti Patel tweeted, “thuggery and disorder will never be tolerated. Our police officers put themselves in harm’s way to protect us all. My thoughts this evening are with those police officers injured”.

Thank you for taking the time to read this news article “Bristol Demonstrations Turn Into Full-Scale Rioting”.