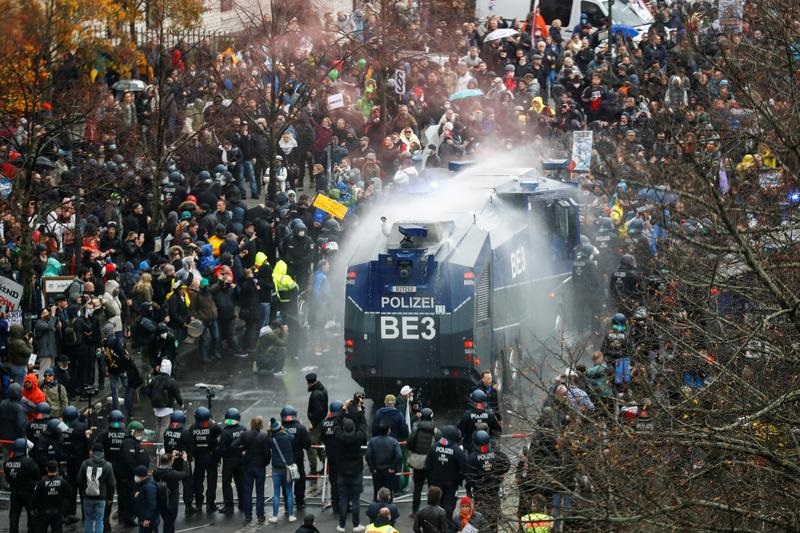 German police were forced to use water cannons, pepper spray and clubs to control protesters rallying over the coronavirus lockdown in the town of Kassel in central Germany as demonstrators numbered some 20,000. Protests against government measures to rein in the pandemic were also reported in Austria, Britain, Finland, Romania and Switzerland.

Germany faces a surge of COVID-19 infections as a more contagious variant of the virus has spread. However, a botched vaccine rollout appears to have deepened distrust against the German government. The suspension of the AstraZeneca vaccine was the latest hurdle in Germany’s efforts to vaccinate its population of 83 million.

After a three-day pause in using AstraZeneca, Germany is now trying to scrape back lost time. On Saturday, the Robert Koch Institute reported 16,033 new cases and registered 207 additional deaths, bringing the overall death toll to 74,565 in Germany.

In Berlin, some 1,800 police officers were on standby for possible riots, but only about 500 protesters assembled at the city’s landmark Brandenburg Gate. Meanwhile, around 1,000 citizens came together on Berlin’s Unter den Linden boulevard to protest against the far-right demonstration.

Various groups, most of them far-right opponents of government regulations to fight the pandemic, had called for protests Saturday in cities across the country.

A spokeswoman for the interior ministry told Reuters, “While we are still in a pandemic we continue to urge people to avoid mass gatherings, in line with wider coronavirus restrictions.”

In Finland, police estimated that about 400 people without masks and packed tightly together gathered in the capital, Helsinki, to protest government-imposed COVID-19 restrictions. Smaller demonstrations were scheduled in other Finnish cities.

Before the Helsinki rally, some 300 people chanting slogans like “Let the people speak!” and carrying placards with phrases such as “Facts and numbers don’t add up” marched through the streets of the city, ending up at the Parliament building.

In the UK, Prime Minister Boris Johnson is reportedly planning to introduce a controversial new law banning protests that are noisy or cause “serious annoyance,” and would carry a maximum jail term of 10 years.