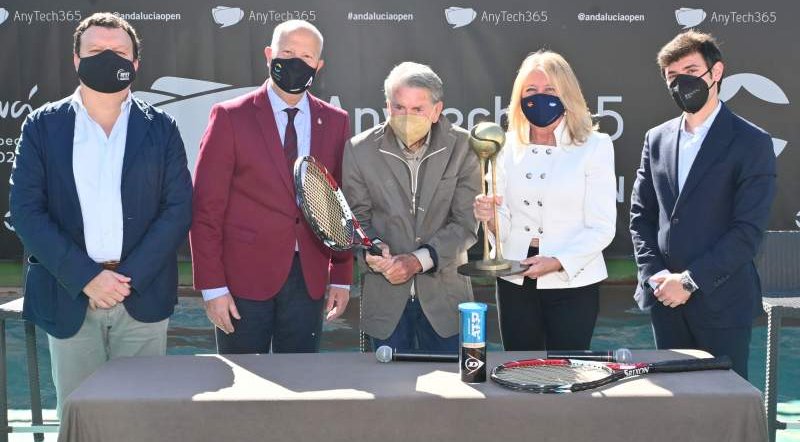 Manolo Santana centre of the picture at the photo call Credit: Marbella Council

THE tennis club at Puente Romano is Marbella will host the Challenger 80 and the ATP 250 AnyTech365 Andalucía Tennis Open tournaments.
Taking place from March 29 to April 4 and April 5 to 11 there will be a number of popular international tennis stars including Andrey Rublev, Roberto Bautista, Pablo Carreño, Stan Wawrinka and Alejandro Davidovich.
Capacity will be reduced to 20 per cent to comply with the security protocols against Covid-19, which will mean the presence of about 500 spectators each day but the Teledeporte channel of TVE will broadcast the Challenger 80 from the quarter finals onwards as well as three daily matches from the ATP 250.
Joining the officials at a special photo ceremony was tennis legend Manolo Santana former winner of the French and US Open titles as well as Wimbledon and now aged 82, he is still a firm devotee of the game although he did once say “grass is just for cows”.
Also present was Marbella Mayor, Ángeles Muñoz and Junta de Andalucia Minister of Sport and former basketball star, Javier Imbroda as both organisations were heavily involved in the promotion of the tournaments.
Mayor Muñoz reminisced about the fact that Marbella has a history of involvement with tennis and made it clear that the City was once again able to organise a safe sporting event and thanked representatives of Royal Spanish Tennis Federation, the event director and Puente Romano hotel for their commitment to stage these events.
Thank you for taking the time to read this news article “International tennis returns to Marbella with two tournaments”.