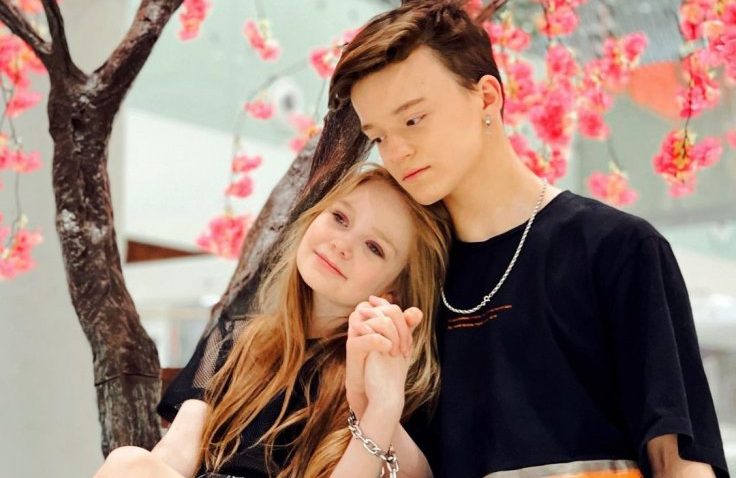 SCANDAL has arisen in the Ukraine after an eight-year-old influencer revealed that she is in a relationship with a 13-year-old boy.

After the announcement was made by young Milana Makhanets on social media, there was an outcry, especially as the ‘couple’ had shared photos which many people considered inappropriate for their age.

The girl’s mother, who manages her social media accounts, said that she sees nothing wrong with the ‘relationship’, adding that it is “their life and they will figure it out on their own.”

Following the controversy, several photos of the eight-year-old and her ‘boyfriend’ were removed. On their ‘Instagram Stories,’ they had posted photos of themselves kissing, sleeping in the same bed, or a photo showing them shackled together while Milana brushes her teeth wearing just her underwear.

Milana has around seven million followers on video-sharing app Likee, similar to TikTok and popular with Russian and Ukrainian teens. Milana also works as a model. She has more than 568,000 followers on Instagram and in a since-deleted post, she revealed that she was in a relationship with Pasha Pai, a 13-year-old blogger living in Moscow.

The Ukrainian government confirmed that it had already contacted the General Prosecutor’s Office, the Ministry of the Interior and the local authorities to take action on the matter, as announced by Nikolai Kuleba, Ombudsman for Children in Ukraine.

The girl’s mother has reportedly been questioned and police have opened an investigation for possession and distribution of material inciting child pornography.

At this time, the case remains under investigation, while social network posts clamour for her mother to be prosecuted or lose custody.

Anna Malyar, a Ukrainian lawyer, shared a post on Facebook saying that “Milana’s mother turned an eight-year-old girl into a seductive woman for paedophiles,” she added that this is an “invasion of normal development of sexuality of children, who could see this and take it as an example.”

Meanwhile, Ukrainian journalist and former politician Igor Mosiichuk commented on Facebook that “this story deserves the immediate intervention of the National Police, the State care agencies and the general public (…) who should consider depriving Mila’s mother of her parental rights.” He added “all this promotion on Mila and Pasha’s social networks is very, very close to child pornography and is a breeding ground, which, like honey, attracts and stimulates paedophiles to act.”

One woman, named Gerda Weber, wrote “Mila’s mum Darya has trouble with her head. She sexualises her own child for money. In addition to the squealing children in the comments, Darya doesn’t realise that the lion’s share of views come from paedophiles.”